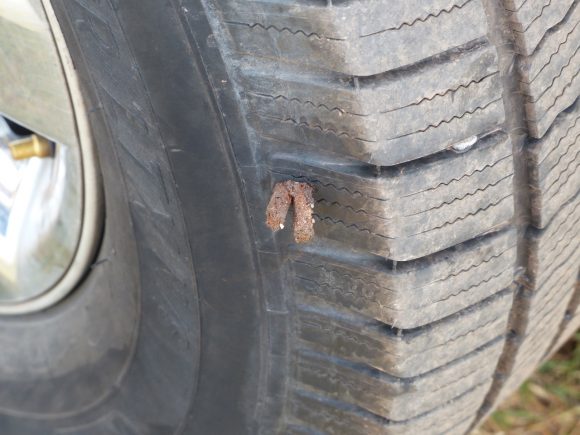 This is the fourth posting of the photos and impressions of Kevin and Janie Justis as they meander along their ‘Summer-Autumn of 2017’s Grand RVing Tour of Canada’s Maritime Provinces.

“This is obviously not my usual attempt at a pretty photo but it does illustrate the adventure of travel,” writes Kevin Justis of Rio Rico, Az., in an email.

“We have all been there in one way or another.  As we were getting ready to leave a campground the other day, Janie (living up to her reputation as a representative of OSHA), noticed a large nail sticking out of a rear tire.  After some debate, we decide to leave well enough alone and drive the 40 miles to a tire store where I had an previously arranged appointment for tire rotation and oil change.  Thankfully we made it with no incident and am now getting ready to go back to the shop because of course the tire was ruined and they had to order in a replacement.  If you look close at the picture, you will see the temporary plug,” reports Kevin.

“A few day prior to this we were in line to get gas at a very busy station.  A truck started to back up toward the side of our trailer so I quickly got over there to direct traffic.  My OSHA companion was not in the vicinity to supervise so I was on my own, never a good situation.  Well, the old guy seemed oblivious to my directions and pined me to the trailer.  Thankfully no injuries to me as he pulled forward.  I quickly got out of the way as he started backing up again and this time he hit the trailer.  I attracted a crowd of spectators as I did some loud vocalizations and pounded on the back of his truck.  Pretty damned frustrating watching the fiberglass flex.  Janie felt it in the car and came out to investigate.

“I guess the combination of anger and shock over rode doing something sensible like getting a license plate number.  As folks who have followed our travels know, we regard transit days as fraught with potential challenge.  These two experiences illustrate why.”