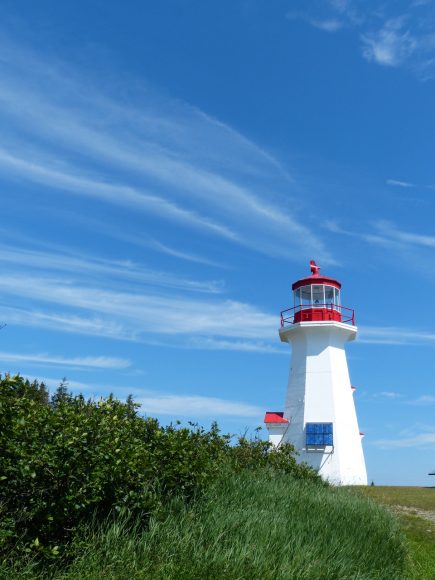 This is the third installment of Kevin and Janie Justis‘ ‘Summer of 2017’s Grand RVing Tour of Canada’s Maritime Provinces.’

The photo (at left) is of a lighthouse at Land’s End on the Gaspe Peninsula, in Quebec, according to Kevin Justis of Rio Rico, Az.

“It was a very pleasant 5 mile hike on a beautiful day.  We are glad we got an early start because the traffic really picked up as we finished.  This is located in Forillon National Park where Janie picked up six new birds in two days,” reported Kevin.

“A few days later we took a boat ride out to Bonaventure Island National Park in Perce and got to experience seeing and hearing (and smelling) huge colonies of nesting northern gannets.  That was my kind of bird watching, obvious with no guessing.  That also was on a perfect day for hiking, cool but sunny with just enough off shore breezes to keep us reasonably comfortable.  That was also a day when we did something very unusual, we did not drive the truck at all.

“We have also gotten in a few bike rides so it has just not been about hikes and micro breweries.  The latter count is up to five,” says Kevin.