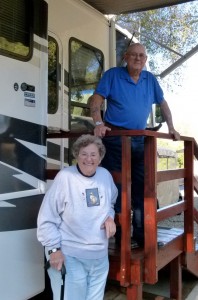 “That was half my lifetime ago,” recalled Jean with a huge smile. “Both of us belonged to the Harley-Davidson Club. We fell in love and got married.”

Soon after tying the knot, the Bixlers started RVing by towing a lightweight pop-up trailer behind their motorcycle for a cross-country ride to Florida.

Over the next few years they traded in their Harley for a Gold Wing. (“I cried when we sold that bike,” said Jean.) And, by the late-70s they started purchasing the first of a series of motor homes. Along the way there were a couple of Southwinds, a Bounder and their current 2004 Fleetwood Pace Arrow class A. 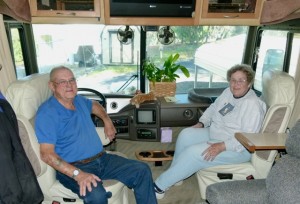 “Both of us love the light,” said Jean, “and with the big slide, we are surrounded by windows.”

This open layout allows them to take in all the incredible scenery they have encountered since retiring and going full-time in the late 1980s.

About that time they joined the fledgling Escapee RV Club and were among the pioneers who in 1990-91 helped build the Park of the Sierras RV Coop Park in Coarsegold, Calif.

“It was a magnificent experience,” remembered Ken, who operated heavy equipment pushing dirt around clearing and leveling new RV sites. Jean, who suffered from back injuries, “baked thousands of cookies” over that time to help keep the volunteers’ spirits up.

“We met some fantastic people,” said Ken. “Everyone took care of each other. If anyone had an operation, people would help out and take over food.”

When not at the Park of the Sierras, the Bixlers can usually be found in the Pacific Northwest. “The Oregon coast is so beautiful,” says Jean. About 13 years ago, the Bixlers ‘went back to work’ as campground hosts and have been managing for almost a decade. They plan to return to work on the North Rim of the Grand Canyon during next summer’s camping season.

Photos: Ken and Jean Bixler outside (and inside) their 2004 Fleetwood Pace Arrow motor home in SKP Park of the Sierras. Julianne G. Crane)