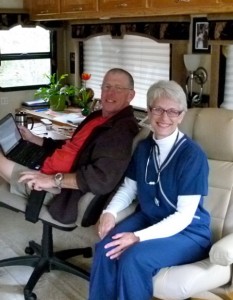 Dar Hoch is among the thousands of RVers who work while living fulltime on the road. Dar, a registered nurse, reports for 12-hour shifts, three days-a-week at a hospital in Aransas Pass during their snowbird stay on the Coastal Bend of Texas.

For five years, Dar and her husband, Thom, have been living in their 2007 39-foot Newmar Kountry Star motor coach and traveling throughout North America.

“We knew in advance of starting this lifestyle that we’d have to do some kind of work along the way,” says Dar. “Being an RN it’s helpful to keep your fingers in the profession on a regular basis. Due to large increases in private health insurance after our first year on the road, it was time for me to look for work.”

Read more about Dar and her advice to other traveling RNs by clicking on “Dar Hoch: Women RVers.com”

The Hochs publish the website “RV Sabbatical Journal.” The online blog features frequent upbeat posts from an active on-the-road retirement of a Midwest couple who sold their home back in 2007 and hit the road.

Their goal is “to see North America, to live its history, to understand its geography, to visit our National Parks, and to just wander… while we’re still physically able to do so.”

Thom handles most of the writing; Dar is the photographer. They refer to their adventure as a “sabbatical”, as they “fully expect to eventually settle down again and get back to some kind of work or business, hopefully in a warmer and less congested environment.”

Photo (click on to enlarge) from top: Thom and Dar Hoch in their 2007 Newmar motorhome. (All photos by Julianne Crane)