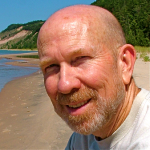 Author and fulltime RVer Terry Hager has just released his second “Reverend Rob Vander Laan Mystery” inspired by his work as a street minister in Grand Rapids, Mich., between 1968 and 1973.

“Reverend Rob Vander Laan prowls an unlikely parish—the dark streets and alleys of 1970 Grand Rapids, Michigan. With Lydia, his seventy-one-year-old night ministry partner, he hangs out with his street people and makes the rounds of the bars. When a go-go dancer at Gus’s Getaway vanishes without her life-saving medications, the ministry duo is compelled to try to find her, armed with their reckless nosiness. When a second dancer disappears and Rob is apparently the last to see her, he becomes a prime suspect. Now Rob and Lydia are burdened with the added weight of clearing Rob’s name and protecting the reputation of the Street Ministry. And if they are to stand a chance of resolving the Getaway trouble, Rob will have to confront his deepest fear and a shameful secret.”

Terry says that after his stint as a Christian Reformed Street Minister, he worked as a pastoral counselor at an ecumenical counseling ministry, serving for five years as executive director.

He and his wife, Ruth, left Grand Rapids in 1997 to pursue their dream of living and traveling fulltime in their “much-prized” recreation vehicle.

They have RV’ed in pop-up campers and a small travel trailer before retiring to fulltime in a fifth wheel trailer. They currently live in their custom built 2002 32-foot Automate fifth wheel.

The Hagers split their time between their homebase SKP Park of the Sierras in California and wherever “the spirit moves us,” says Terry. “It has varied from all-summer trips in the Rockies, Alaska and the Atlantic Provinces, to long stretches of staying put in Desert Hot Springs, Calif., and Michigan.”

Wherever they travel, Terry continues to find time to write and Ruth continues to expand her photography portfolio.

Terry’s articles have appeared in travel and RV magazines including Western RV News, Highways, Campers Monthly and Family Motor Coaching. Look for one of his articles in an upcoming issue of Escapees.

For more information on Terry Hager’s novels, click on: “Last Call for Murder” and “Death on the Night Watch”