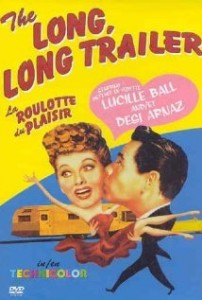 It’s hard to believe this film was produced in 1954 … it is still hilarious in parts and definitely fun to watch.

“The 1954 film, ‘The Long, Long Trailer,’ in gorgeous Technicolor and directed by Vincente Minnelli, is a somewhat allegorical tale of a newly married couple who invest in a 40-foot trailer as their first home–and immediately regret it. Well, at least Arnaz’s character does; he’s the one who has anxiety attacks over operating electric brakes while steering up and down one-lane, mountain roads.” — Tom Keogh, Amazon.com

In the film, a powerful 1953 Lincoln Capri convertible (which is equipped with a 205 HP V8 engine) was needed to pull the heavy 1953 New Moon travel trailer (which cost $5,345 at the time) up and over the steep grades of the Sierra Nevadas where the scenes were filmed.

The “Long, Long Trailer” is also available through Netflix.