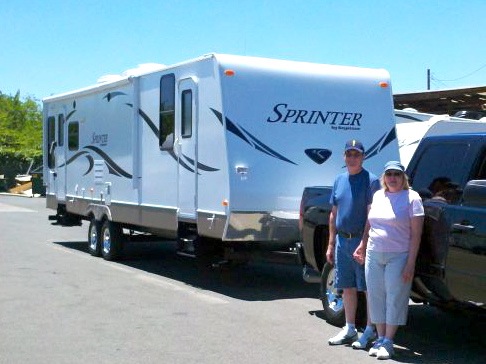 Lynn Nolan and her husband, Dick, along with their three dogs (Hank, Dasher and Elphie) started full-time RVing in July 2012 in their brand new 34-foot 2012 Keystone Sprinter travel trailer.

The Nolans are spending this holiday season at the Escapees’ Park of the Sierras in Coarsegold, Calif. Lynn sent in this favorite RV holiday memory —

“Santa lived in my RV park”
by Lynn Nolan

“It was around this time of the year when the nights had become chilly and the first Christmas Carol was heard on the radio. Instead of feeling great joy and eager anticipation, I felt more melancholic. There wasn’t enough room in our new living situation for a Christmas tree, at least not the large ones I used to have in my living room of my old house with the nine-foot ceilings.

“Even if there was room for a tree, gone were all the Christmas tree ornaments and decorations that my little family used to lovingly unwrap from tissue paper each December. They had been given away when our house was packed up and we moved out for good. At that time, in the heat of August, being filled with excitement about a new lifestyle on the road, and knowing only too well that storage space was limited, it didn’t seem to matter very much.

“We decided to spend the Christmas season at an RV park in Fresno, Calif. I had moved to that city in 2005 and knew how friendly the people were. If I couldn’t be back in my house, I could still see my friends and be in familiar surroundings.

“At first, however, it still felt foreign. No matter how big of a space that is available in an RV park, I still didn’t have the same shrubs I used to decorate with lights or a big front door to put a welcoming evergreen wreath upon. Then we began to notice how other RVers had lights strung across their awnings, and we bought large multicolored ones for ours. As with everything else for new RVers like us, even that was a challenge until we found the special hooks to keep the lights up.

“Taking my dogs out for the last walk in the evening became more enjoyable. When darkness fell, all the Christmas lights went on around the park and it felt a little more like the holiday season. One space in particular had quite a few decorations. Many strings of bright white lights were wound around the trunks of two large trees that graced their spot. All around the windshield of their bus and across the awning were brightly lit bulbs. It made me wonder who had that much Christmas spirit in an RV park which one wouldn’t exactly describe as deluxe. 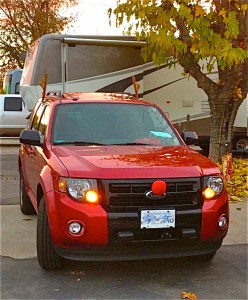 “The owner’s car was not there too often. When I finally did see it, I’ll be darned if it too wasn’t gussied up in holiday style. It had a big red nose in the shape of a large powder puff in the front, and antlers on each side of the top. It was a Rudolph the Red Nosed Reindeer car. My curiosity really peeked then. Who were the occupants of that big tricked-up bus?

“One day while at a laundromat in town, I saw the Rudolph car parked in the lot. A man sat in it while waiting for his laundry to be done. When he came in to get his clothes, I told him I was staying at the same RV park and complimented him on his space decorations and cute looking car. He said he was the Executive Assistant to the local mall Santa Claus who posed with the children for photos during the Christmas season. I don’t know if I was more surprised to learn that Santa had an Executive Assistant, or that he lived in my RV park.

“I began to notice Santa’s assistant more often around the park because he too had dogs he walked. Then one morning around 9 a.m., I saw him and another man getting into the reindeer car. They were dressed in street clothes, but one had the trademark white beard and white hair of Santa Claus. I concluded that they were probably on their way to the mall, where Santa would change into a clean red suit.

“As the weeks went by I had the opportunity to talk to many of the park residents and to both of these men about their lives. ‘Santa’ and his ‘Executive Assistant’ were from Canada and came to the United States each fall. After Christmas they made their way south to Arizona and sometimes into Mexico until spring. They most often caravanned with other mall Santas, and met up with even more for a yearly get-together. They took their work very seriously, but made time for some fun between holiday seasons.

“It became uplifting in an unexplainable way to know that Santa lived in the RV park where I did. His bus seemed to be a portable workshop, and his space was the North Pole. Perhaps it was because he was spreading so much joy each day to children.

“As it got closer to Christmas, it became less important that my old holiday decorations were gone. Each day as a full-time RVer I was learning so much more about people, travel, and taking care of myself than I ever did living in my old house.”

If you would like to share a favorite RVing moment, jot down a few paragraphs and email with a photo (jpeg) of the place, or event, or simply of you and your RV by clicking here.