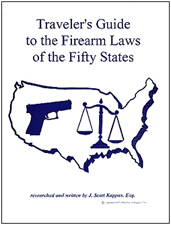 “Many RV owners are unaware that firearm laws, unlike traffic laws, can change radically when traveling from state to state,” said author, RVer and attorney J. Scott Kappas in an e-mail. “The uniformity that exists in most other areas is absent in firearm laws. What is perfectly legal in one state becomes a potential felony in another. The ‘Traveler’s Guide’ acknowledges these inconsistencies by providing RV owners with an easy to read one page state-by-state summary of the laws most useful to the traveler. It helps RV owners avoid some of the basic pitfalls associated with traveling with firearms.”

Kappas added: “The motivation for writing the book came from a trip I took to Massachusetts in the late 80s.  Massachusetts mandates one year in prison for violating any of its gun laws.  We had a loaded handgun in the glove compartment (perfectly legal in KY).  We found out after the trip that in Massachusetts such carry is illegal without a Massachusetts carry license.  We could have been arrested a spent a year in prison for something that wasn’t even worth a mention in our home state.”