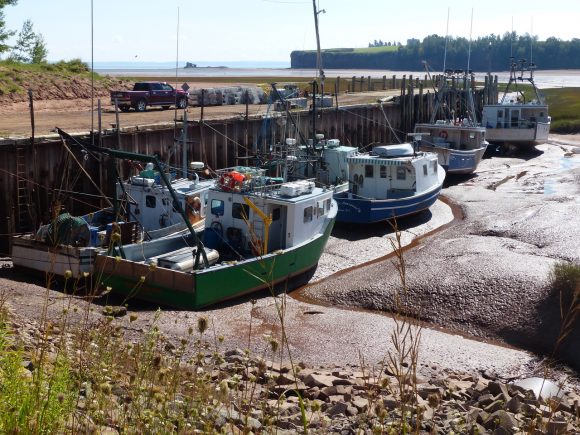 This is the 14th installment of Kevin and Janie Justis‘ ‘Summer of 2017’s Grand RVing Tour of Canada’s Maritime Provinces.’

This post finds Kevin and Janie Justis of Arizona near the Bay of Fundy in Nova Scotia, Canada.

“We finished our stay in the Maritimes by spending a little time on the Bay of Fundy and found it a lot more interesting than I anticipated.  I vaguely remember thinking the last time we were near it that I commented that I did not need to see a bathtub draining.  This time I decided to check it out.  I have to admit that I thought it was very impressive.

“We stayed at a Provincial Park near where boats were tied up .  The area is really a big agricultural area but also has a lot of fishing.  As you can see from the picture above, the boats are setting on the bottom due to the tide being out.

“We went back to the same site and took a picture with the tide in and the boats tied up to the dock like you would expect.  As I was finishing up, a car pulled into the parking lot and we met Carnation, known as ‘Carney’ who proceeded to tell us about the fishing industry there, the boats, traps, etc.

“I found myself listening instead of talking (hard to believe, ah).  He told us that a fishing license is now worth a million dollars and  the lobster fishermen are making really big money.  Because of the strong tides, each trap has a base of concrete to keep it from moving and weighs 400 pounds.  We ended up following him to his nice place on the bay and continued our conversation about his garden, wife, and family.

Carney “was typical of a lot of the folks from Nova Scotia, very friendly.  I told him he would be one of my favorite memories of the area.”

—  Text and photo by Kevin Justis