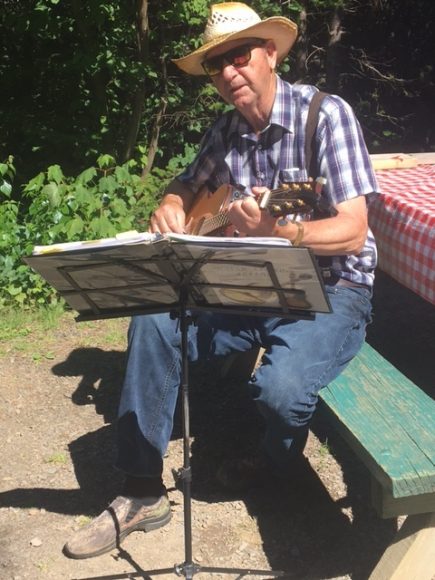 This is the 13th installment of Kevin and Janie Justis‘ ‘Summer of 2017’s Grand RVing Tour of Canada’s Maritime Provinces.’

This post finds Kevin and Janie Justis of Rio Rico, Ariz., reflecting on fellow campers at a Newfoundland Provincial Park.

“I wandered over to Randolph and Emma’s site when I heard music and singing,” wrote Kevin in an email.  Randolph “is 80 years old and started to learn how to play guitar when he was 70.  He told me he had no plans to go international. In fact, he has never been out of Canada.

“Last year Randolph put up 400 pounds of potatoes and a 100 pounds of turnips.  On our last day as neighbors, he came over with about a dozen potatoes and offered them to us.  He said it was what Newfoundlanders do.  Being half Irish, I eagerly accepted the gift and later found them to be very tasty,” said Kevin.

“Newfoundland was full of such surprises.”

—  Text and Photo by Kevin Justis