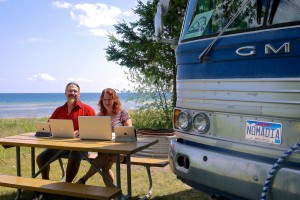 Cherie Ve Ard and Chris Dunphy of Technomadia.com rely on mobile Internet for their software development and technology consulting business.

“All of the major cellular carriers have been deploying faster and faster connection speeds in more locations,” said Cherie Ve Ard.  “Most folks can now get online as simple as using their smartphone as a hotspot for their computers.”

For those who want to venture further away from civilization, “an investment in cellular boosting equipment, and even possibly mobile satellite gear may be worthwhile,” she said.

Ve Ard and Dunphy started Technomadia.com in 2006. They call themselves “technomads” because they are “exploring the intersection of mobility, technology, career, community and serendipity.” They run their business entirely from the road in their “geeked-out” vintage bus conversion, with their cat, Kiki. 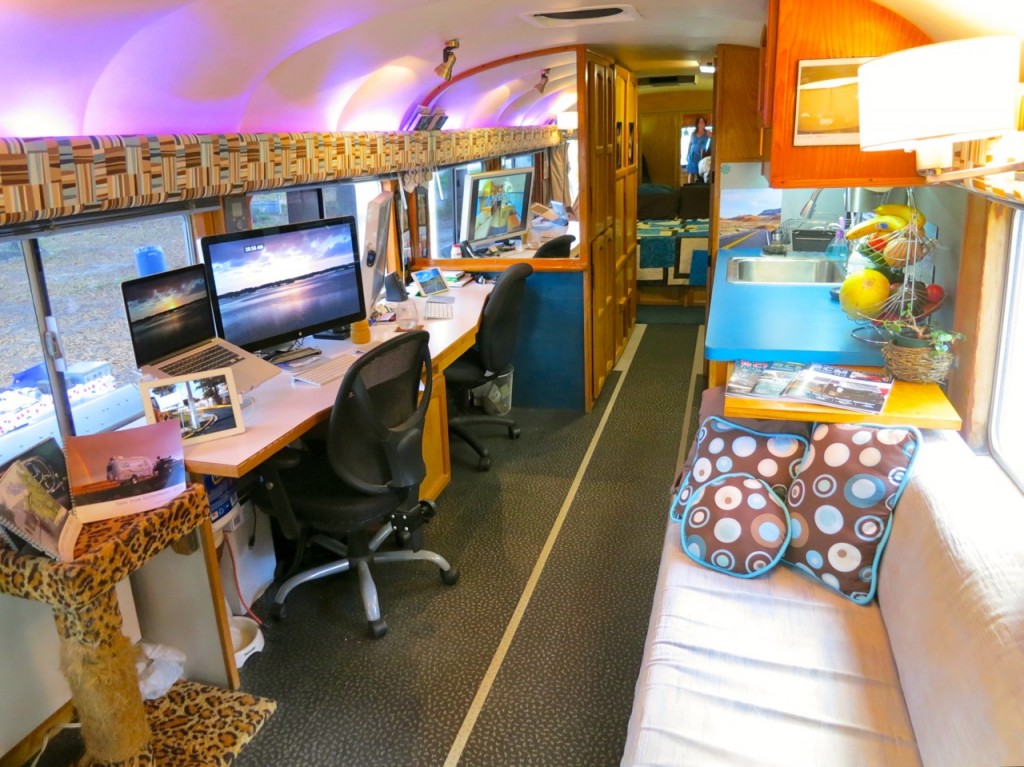 Over the years they have traveled in several different RV setups, however, in 2011 they purchased a classic 1961 GMC Greyhound bus.

“We built desk space in the front and have installed all sorts of cellular and WiFi boosting gear, including a cutting-edge lithium ion battery system,” said Ve Ard. “We push mobile technology to its edges on a regular basis.”

Their recently published a book, “The Mobile Internet Handbook“ (2013) which addresses many questions on how to connect online while traveling. The handbook helps readers set realistic expectations for what is possible and helps people assess their own needs in order to pick the type of gear that will best serve their needs. 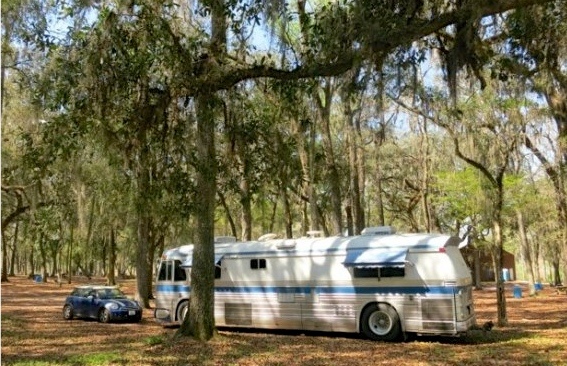 “We’ve done a lot of research over the years on this topic to enable our own lifestyle,” said Ve Ard, “and have tried just about every possibility to see what works and what doesn’t. We’ve also learned to live within the limitations.”

If you missed the other two posts in this series, click on: ‘RVing is for Geeks, Part 1 — Need to be hooked up to the Internet while traveling.‘

If you missed ‘RVing is for Geeks, Part 2 — Options for staying in touch while on the road’ featuring Jim and Chris Guld of Geeks On Tour click here.

Click on photos to enlarge: (Top) Because of improved technology, full-time RVers Chris Dunphy and Cherie Ve Ard of Technomadia are able to “go to work’ wherever they are, including the J. W. Wells State Park, Cedar Rivers, MI. (Middle) Dunphy and Ve Ard have modified the interior of their 1961 GMC bus conversion to include expansive work space. (Bottom) Great view of bus and toad parked at campsite in Florida. (Courtesy of Technomadia.com)