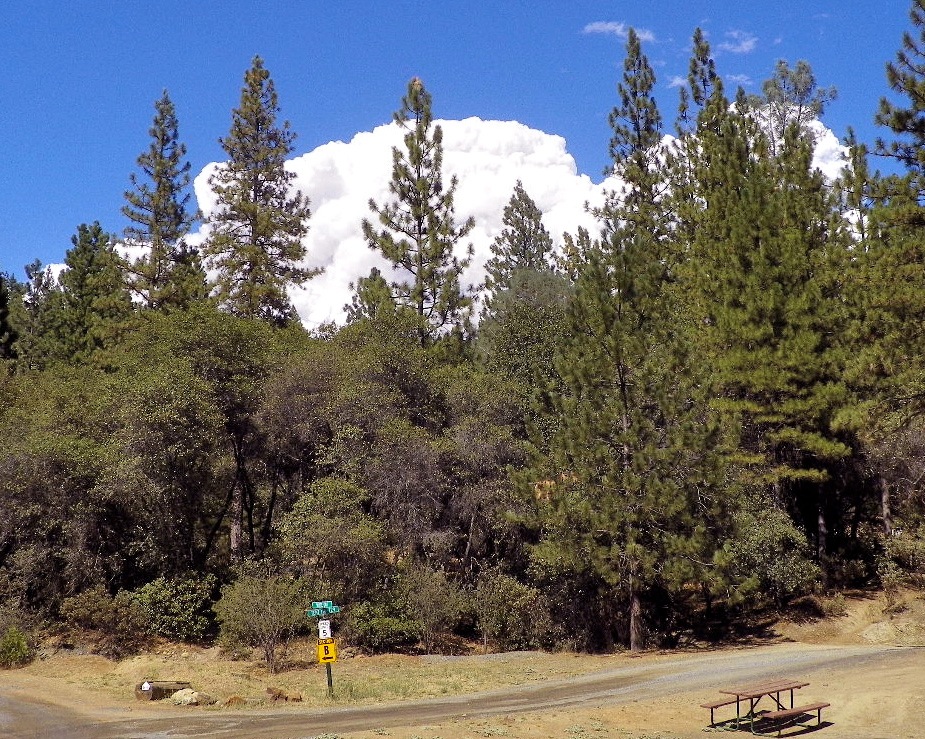 Full-time RVers Betty and Lance Wilson find themselves within a few miles of the massive Rim Fire in California.

The Wilsons are workamping at Yosemite Pines RV Resort on Hwy 120, just 22 miles west of Yosemite National Park. Highway 120 is presently closed between the Hwy 49 south junction (outside the park) to Crane Flat Campground (inside the park).

“We evacuated the Yosemite Pines campground on Wednesday,” wrote Betty Wilson in an e-mail, “and stayed for three nights at an RV campground in Angels Camp.”

“As crazy as it may seem, Saturday morning, minus two couples who chose to move on elsewhere, we returned to the Yosemite Pines. The managers wanted us back, if we were willing, and had been given information supporting our safety and ability to get our rigs down in the event of future evacuations,” Betty continued.

“It remains to be seen how much ‘work’ will need doing. Almost everyone with reservations for Labor Day weekend has been called…and quite a few are intent on coming, despite our warnings about the smokey conditions (particularly in the early a.m.) and closure of Hwy. 120 into Yosemite National Park from the west. Lance may be asked to organize the Deli to help feed some of the firefighters who already have been using us to rest.”

“The ‘plume’ that forms and becomes the ‘lid’ of the firestorm has moved away from us to the north and west. We watched…mesmerized…it ‘being born’ right in front of us (on Wednesday). In SECONDS, this beautiful pristine white cloud boiled and bubbled up into a monster reaching thousands of feet into the air. I grabbed the camera and took several shots.” (See above.) “Even sensing the death of animals and forest below it, I had to admire the beauty of it…and the extreme suddenness of its development,” wrote Betty.

“So …. We’ll take it a day at a time, keeping the option active to boogie out of here if necessary. We are watching the skies…lots of planes. DC-10s have doubled up, coming now two at a time about every hour.”

According to Yosemite National Park’s update (Sunday, Aug. 25, noon) most of the park is not affected by the fire and is relatively smoke-free. The northern part of the park, including some areas along the Tioga Road, has some smoke. Conditions may change if winds shift. For a map of the closed areas in Yosemite, click here.

Photo: Rim Fire’s cumulous cloud (on Wednesday, Aug. 21) the plume that forms and becomes the ‘lid’ of the firestorm. (Photo by Betty Wilson)