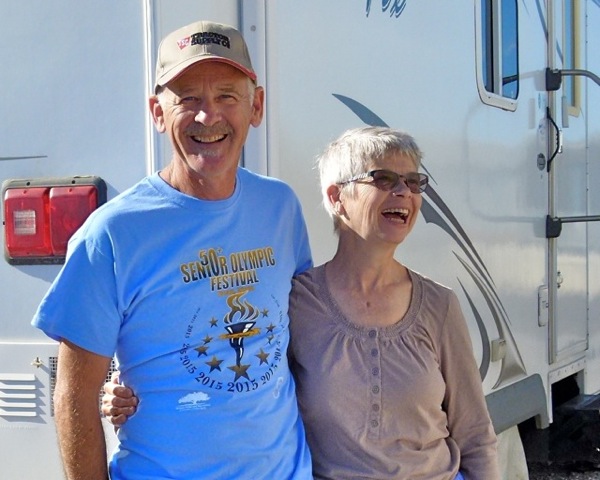 Full-time RVers Richard and Donna Shrauger were born, and spent their early years, in a small rural town in New York State.

Then, a decade or so ago, they moved to Colorado. On a whim, they ended up in Yuma  after deciding they wanted to avoid the Rocky Mountain winters.

Donna, a registered nurse, had seen an ad for seasonal nurses needed in Yuma. From there, they decided to continue traveling. “We love the RV lifestyle,” said Richard.

Both Donna and Richard officially retired from their ‘day jobs’ in 2014.  In addition to several years as a travel critical care RN, Donna’s career included working in nursing education. Richard, a fabricator and welder for most of his career, built their last two homes “My dad was a contractor so I grew up pounding nails,” he said.

Since 2003 they have been full-time RVers, first in a fifth wheel and then downsizing to a 2010 25-foot Northwood Arctic Fox 25R travel trailer. 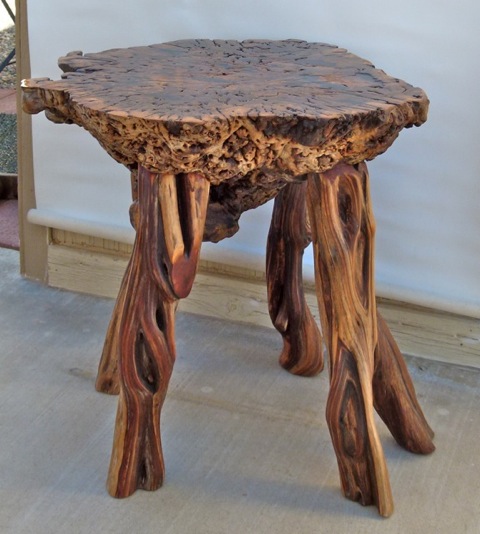 A few years ago the Shraugers fell into woodworking after helping a friend one summer build a hand-crafted railing for the loft in his cabin.

“We were hooked,” said Richard. “We create all of our products using dead wood that we hunt out in our travels. A large percentage has been killed by fire. More than 4-million acres were burned by forest fires in 2013 in the United States.”

“We try to create more organic products by using the natural shapes of the wood rather than cutting everything into square or rectangular shapes for use,” explained Richard.

“We first started out with smaller items then expanded into larger pieces such as our coffee tables. We love gnarly, burly, unique pieces of wood.”

Their travel trailer is outfitted with solar power. “We do a lot of our work using tools powered by the sun.”

The Shraugers spend winters in the desert southwest. Summers are spent mostly in the high mountains of Colorado. “In between we like to wander, but we’re always looking for wood,” said Richard. “It has been a passion and is extremely gratifying.”

To see more of their hand-crafted items go to: 2woodhunters on Etsy.com