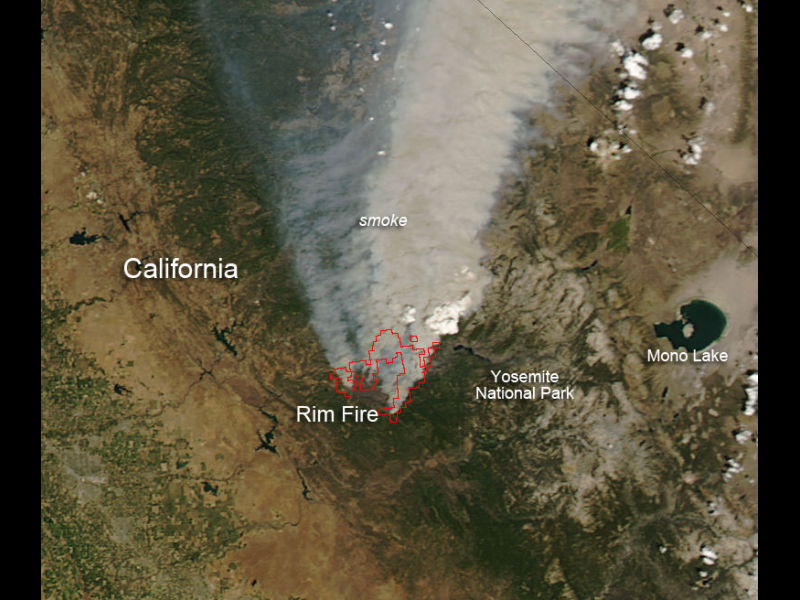 With all the wildfires across the West, it is time to update where to find current information about active blazes.

When traveling it is sometimes difficult to obtain access to the internet. When you can get online, there is an excellent resource I became aware of by reading the RVTravel.com newsletter.

It is a very informative public information map of active wildfires in the USA. Just click here.

Above is the highly volatile Rim Fire burning near and in Yosemite National Park which began in California on August 17, 2013.  “This fire is treacherous and has tripled in size in the last few days to now over 106,000 acres.  The fire had been 5% contained, but the fire jumped fire lines and is currently only 2% contained. According to the San Jose Mercury News, ‘There appeared to be no stopping the massive Rim Fire as it exploded further into Yosemite National Park heading into the weekend.  The fire nearly doubled in size overnight into Friday and stood at about 106,000 acres, or 165 square miles — nearly the entire size of San Jose.”

“Cal Fire spokesman Daniel Berlant said although more than 2,000 firefighters were working on the Rim Fire it’s been a struggle to safely access the rugged canyon terrain, while the extremely dry conditions have helped the fire spread quickly.  ‘And now the fire has grown to a size and intensity where it’s creating its own wind and weather,’ Berlant said. It was only 2 percent contained.”

“The Rim Fire blaze combined with the mostly-contained, two-week-old 20,000-acre American Fire smoldering in a forest west of Lake Tahoe. Yosemite National Park was the least impacted, as the vast majority of the park remained open and the wind blew the smoke away from the tourist destinations at the center of the park. NASA’s Aqua satellite collected this natural-color image with the Moderate Resolution Imaging Spectroradiometer, MODIS, instrument on August 22, 2013. Actively burning areas, detected by MODIS’s thermal bands, are outlined in red.  NASA image courtesy Jeff Schmaltz LANCE/EOSDIS MODIS Rapid Response Team, GSFC. Caption by Lynn Jenner.”