We couldn’t resist stopping at the world’s largest hand-planted forest set within the Nebraska Sandhills.  This primarily Ponderosa pine forest and combined grasslands are unique to the National Forest System.

As I mentioned a couple of days ago, we camped at the Bessey Campground on the Nebraska National Forests and Grasslands which is 16 miles east of U.S. Hwy 83 and Thedford, on Nebraska Hwy 2 near the small community of Halsey. There is a 2-mile one-way road up to an historic fire lookout station. It was a perfect bicycle trip for us. 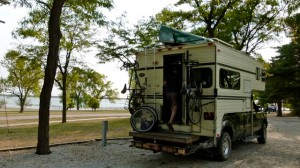 A couple hours drive south of the Nebraska National Forest down U.S. Hwy 183 is the Corps of Engineers-Harlen County Lake project that stretches between Alma and Republican City. This is Nebraska’s second largest lake. It sits in the south-central part of the state, only seven miles from the Kansas state line.

Jimmy didn’t get a change to pull out his fishing pole, but locals say it is considered some of the best fishing in Nebraska. The Corps maintains six established campgrounds, however most of them will be tucked away for the winter by the end of September. According to the camp host, at least the Hunter’s Cove campground will remain open to hunters (and everyone else) through November with limited amenities.

Cost for a site with electricity was $10 with the America the Beautiful National Parks and Federal Recreation Lands Senior Pass. Hot showers and flush toilets, along with laundry facilities were nearby.