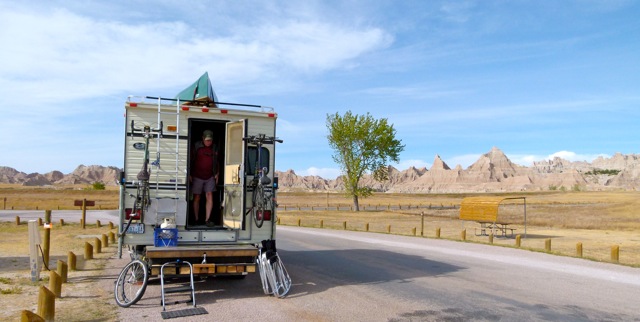 Located on the east side of the Badlands National Park in South Dakota, the Cedar Pass Campground has 96 sites with a sweeping spectacular view of the rugged badlands formations. It is only a short walk of the Ben Reifel Visitor Center.

Camping fees are $15 per night per campsite and $28 per night for campsites with electrical hook-ups.(50-percent off for America the Beautiful pass holders, including Seniors and Military.) A dump station is available for a $1 per use fee. Cold running water, flush toilets, and covered picnic tables are available. According to the camp hosts, there will be a limited section of the campground open during the winter months. First come, first serve. 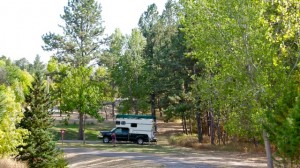 A short day’s drive south of the Badlands National Park along two-land roads is Chadron State Park in the beautiful Pine Ridge region of northwest Nebraska. The beauty was marred somewhat when we drove through because of a series of lightning-caused wildfires that swept through the area about three weeks ago.

In late August 2012, the park was threatened by the 58,000+ acre West Ash Wildfire. According to news sources, “crews set backfires in the park to deprive the fire of fuel. The controlled burns worked and saved all structures and equipment. The park reopened to visitors in early September 2012.” 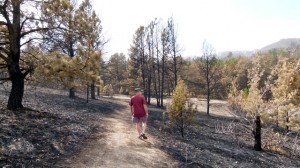 According to one park representative, the wind was so strong and the area so dry because of drought, the fire spread 15 miles in less than six hours. About half the park was affected by the burn.

As for costs, because we were out of state travelers, we paid $5 day for a day pass and $18 for a site with electric hookup. The park is open year round with limited activities.