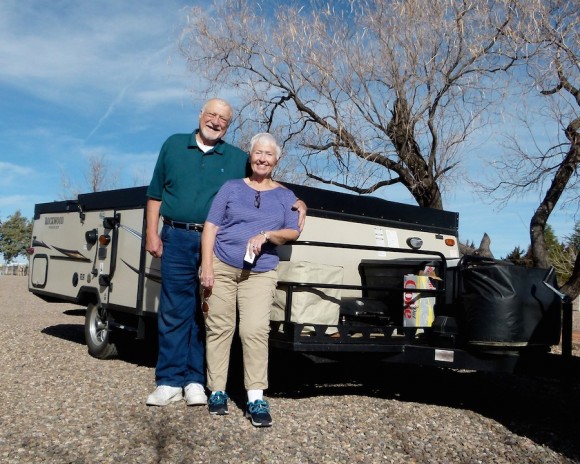 Other A-frame owners are longtime RVers Linda and John Keltgen of Mariposa, Texas, who began camping in the 1980s with a tent trailer. Over the years they went through a number of different rigs until 2007 when they retired and set out to RV full-time in a 31-foot Crossroads Cruiser fifth-wheel trailer with three slides.

“It was perfect for our adventures,” recalled Linda Keltgen. After seven years traveling the country, they sold their RV and purchased a small home. However, “it didn’t take long until we began getting the itch to be on the road again.”

This time they wanted a smaller trailer their 2014 Nissan Pathfinder could tow with no trouble. They selected a 21-foot Rockwood Premier A122BH by Forest River RV.
In addition to kitchen, dining and sleeping areas, it includes a front, exterior storage rack that carries extra camping gear and a cassette porta potty.

“It tows like a dream,” said John Keltgen. “I don’t even know it is back there. When we get to our campsite, it is very easy to set up and tear down. People often come over and ask questions.”

Another plus is that their trailer is a snap to unhitch from their Nissan. “In no time at all, we can be off sightseeing or going out to dinner,” said Linda. “I haven’t done much cooking in this little rig because one of the activities we love doing is sampling local foods.”

Although the retirees bought their A-frame for short camping trips, they have been on longer vacations to Minnesota and Arizona. “So much for the short trips,” said Linda Keltgen.

The next post in this four-part series will talk about some of the compromises one makes by choosing this smaller folding rig. To read other posts in this series on ‘Folding A-frame trailers,’ click here.