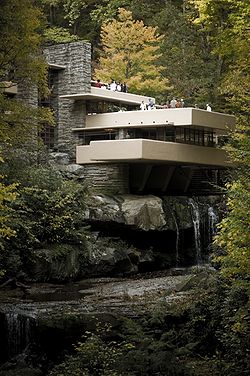 One rainy fall day, Jimmy and I spent several hours meandering through the incredible ‘Fallingwater,’ a very special, organic structure that incorporates nature, natural materials and waterfalls near Mill Run in southwestern Pennsylvania.

Frank Lloyd Wright, America’s most celebrated architect, designed this ‘weekend’ house for the Kaufmann (Department Store) family of Pittsburgh, Pa, in the mid-1930s, when he was in his mid-60s.  He was already world-renowned and the house, itself, became instantly famous. In 1976 it was designated a National Historic Landmark.

“During his 70-year career, American architect Frank Lloyd Wright championed a personal belief that architecture should address the physical, social, and spiritual needs of the inhabitant while remaining in harmony with the landscape. Wright, who punctuated nature with a capital ‘N,’ placed great importance on the unity of man and nature and strived to compose environments where the architecture and land formed a unified whole, as in Fallingwater (1935), the house he built atop a waterfall,” according to Artsy.net.

The night before we visited Fallingwater, we met two young people from the Netherlands who are in the States for only a week and chose to spend a large chunk of their time traveling to Mill Run to walk through ‘Fallingwater.’ Then, while waiting for our tour, we talked with a woman from Melbourne, Australia, who was on a month-long tour in the USA of Frank Lloyd Wright’s buildings.

I found myself extremely proud to be there and to know that people travel from around the world to see and experience this magnificent salute to creativity.

To read more about Fallingwater click here.. We camped at the nearby Ohiopyle State Park.