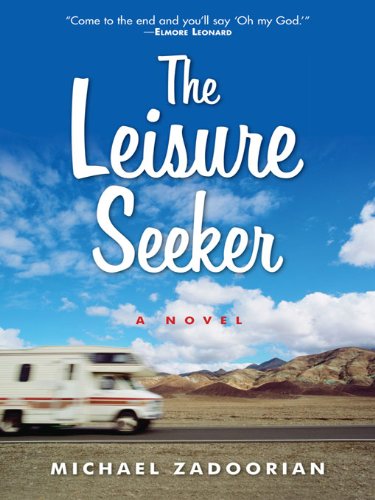 The Leisure Seeker by Michael Zadoorian, follows  “a couple, married nearly 60 years and in their early 80’s, who decide to take a road trip. Actually, the wife, Ella, decides. Her husband, John, has a fairly advanced form of dementia and spends only a small part of the time lucid. Ella, herself, has cancer and has refused chemo and radiation treatments,” (writes Lloyd Russell, The Book Sage on Amazon.com.)

Despite the entreaties of their middle-aged children and her doctors, they take off on a sunny September morning determined to follow the old Route 66 from its beginnings in Chicago to Disneyland in California.

“A sort of Easy Rider meets The Notebook, Michael Zadoorian’s poignant, funny, vibrant, and unforgettable novel. The Leisure Seeker is a story of two 80-somethings who escape from their retirement home and embark upon a hilarious and touching end-of-life road trip,” says the Detroit Free Press.

Michael Zadoorian’s bio states he has worked as a copywriter, journalist, a magazine feature writer, a voice over talent, a shipping room clerk, and a plant guard for Chrysler. He lives with his wife in an old house filled with things that used to be in the houses of other people.