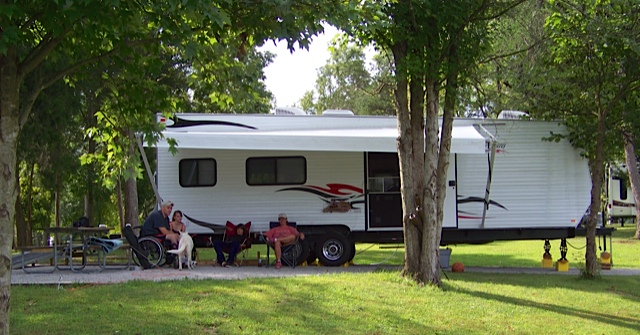 Evan and Terri Young, 40-somethings from Whitesville, Ky., are avid four-wheel enthusiasts who selected a toy haul trailer for their RV.

At the age of 20, Evan Young was in a car accident that left him partially paralyzed. He was determined to pick up the pieces and continue with life as normally as possible. That included driving off-road vehicles.

In 2013 they “searched high and low for an accessible toy haul camper to fit our needs and remain within our budget,” said Terri Young. “The only place in the United States we could find who already had wheelchair-accessible floor plans was Dune Sport, of Mesa, Arizona.” 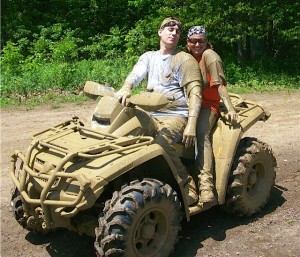 The Youngs worked closely with Dune Sport on special adaptations to their 28-foot Firestorm, such as increasing the size of the bathroom by almost 2 feet.

“Our camper contains one of the biggest bathrooms you can get: 8-foot by 5-foot with a 36-inch by 36-inch shower. It is almost big enough for Evan to completely turn around without bumping into the shower or commode,” said Terri Young.

In the fourth, and final post, Mark Douglass talks about the limited number of accessible campgrounds and his nonprofit RVing Accessibility Group.

If you missed part 1 — Click on ‘Factory modifications’
For part 2 — Click on: ‘Full-time RVers Lori and Mike Sanders travel, play’