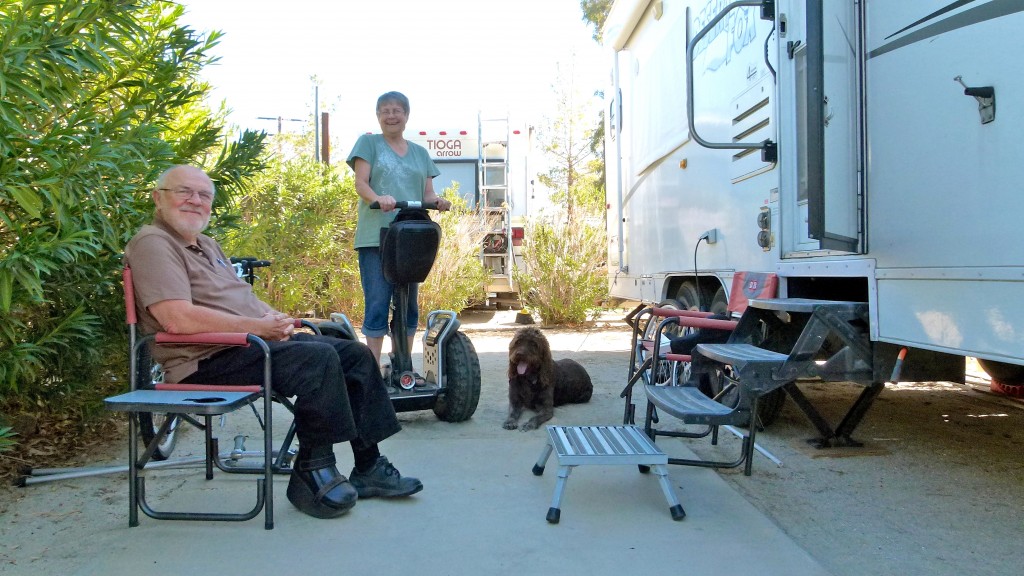 Lori and Mike Sanders of California are retirees who have been full-time RVing for five years. Mike Sanders was born with Spina Bifada and has a shortened, deformed right leg.

“He got around pretty well for 60 years before developing severe osteoarthritis, which put him on crutches,” said Lori Sanders.

The crutches did not stop Mike Sanders from traveling — or playing. They purchased a Polaris RZR off-road ATV and acquired a 2005 33-foot Desert Fox 28KS toy hauler in order to take their four-wheeler with them. A toy haul trailer features a rear end that drops down, forming a ramp for access into a garage area where motorized toys can be safely stored.

The full-time RVers are currently having a 37-foot gooseneck fifth-wheel toy hauler custom-made. “The living quarters are about the same on each rig,” said Lori Sanders, “but the new one has better handicap features.”

Best of all, “we will be able to take all our toys with us including a canoe, the RZR, and two Segways,” said Lori Sanders. The Segway with its off-road wheels and tires, and an aftermarket seat, “makes it possible for Mike to go just about anywhere, many more places than a wheelchair could go.”

Next we visit with RVers Terri and Evan Young who are avid four-wheelers.