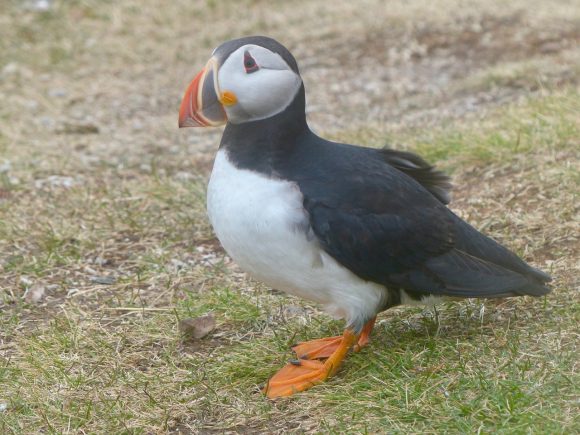 This is the 8th installment of Kevin and Janie Justis‘ ‘Summer of 2017’s Grand RVing Tour of Canada’s Maritime Provinces.’

We pick up with the Justis’ of Arizona after they caught the ferry to Newfoundland and began exploring the Bonavista Peninsula.

“The forecast was for rain starting in late morning so we got an early start,” writes Kevin Justis of Rio Rico, Ariz.  “The first item on the agenda for the day was hiking the Skerwink Trail which is supposed to be semi famous.  It was rated as moderate-to-difficult but was listed as only 5.1 kilometer.  It had plenty of up and down, some great views of sea stacks and a very good panorama of a lighthouse and small village.  The wind and gray skies were enveloping us as we finished and felt fortunate to finish before rain started.

“We then went to the village of Trinity which has a small harbor and is full of historic and colorful structures.  We had a good lunch and I finally found a seafood chowder that met my standards.  We tried the Iceberg beer which is supposedly made with water from icebergs that they harvest.  A pilsner but a good one if you like the light side.  Still no rain.

“So we traveled up to Elliston which is famous for its potato cellars and puffins.  The closer we got, the foggier and more windy it got. When we got out of the truck, the wind made it hard to even open the door.  It was howling, that is for sure, and we were happy to pull up our hoods and batten down the hatches.  The fog was so bad that it kept condensing on my camera lens and a good portion of the pictures were grey and a bit fuzzy.

“The picture of the puffin was taken right after I cleaned the lens and is relatively sharp, at least compared to most of the others.  We have seen puffins before but never this close, practically at our feet.  As we were walking back to the truck, it started to rain.  Janie thought it was sleet since it was wind driven and hit hard.

“A very good day but the rainy drive back to the campground got a little long.”