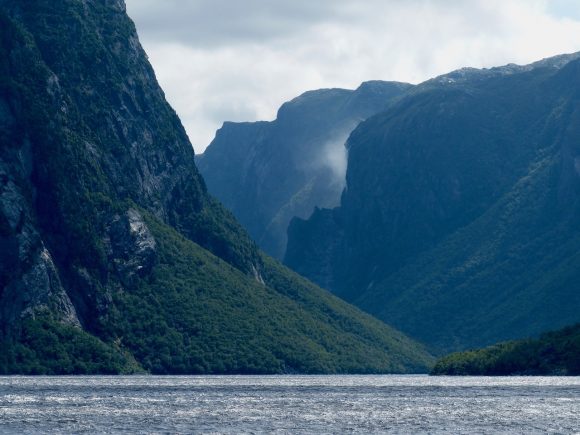 This is the 9th installment of Kevin and Janie Justis‘ ‘Summer of 2017’s Grand RVing Tour of Canada’s Maritime Provinces.’

Kevin and Janie Justis, longtime RVers from Rio Rico, Arizona, sent in a post from Gros Morne National Park, a world heritage site located on the west coast of Newfoundland and bordering the Gulf of St. Lawrence.

“Sometimes when we see something new, it reminds us of some where else we have been.  Western Brook Pond (pictured above) is like a fjord except that it is freshwater instead of salt water.  It reminds us of the Colorado River and the mighty Columbia River.

“Our stay here was for five days in a campsite along the coast.  We did a number of hikes, as well as, the boat ride on the ‘fjord.’  The weather has turned more fall-like with more rain than the first two weeks we were here.  Someone said the other day that summer was over.  My guess is that we have seen the last of temps in the 70’s.  The golden rod is almost in full bloom and we see a few leaves starting to turn.  Fall is in the air up here.

“We were aware that one of Newfoundland’s unique food items is cod tongues and cheeks but had managed to avoid them.  We spent one day driving the south road in the park to where it dead ends at Trout River and the Gulf.  As are most of them, the village had seen better days with the decline of the fishing industry.

“Our few adventures in dining here have not been particularly rewarding so we hesitated about trying another place.  Still it was way past lunch time so we gave it a try.  Janie has learned to mostly play it safe when ordering but she talked me into trying the tongue and cheek menu item.  The food in general was excellent and my entree was really pretty good.  Janie was not a fan of the texture of the tongue but the cheek was ‘ok’ with her.  The place was run by the daughter of the first owner who started selling ice cream in a part of her husband’s boat house.  She was so successful she kept taking more and more of the space and it is now two stories and totally devoted to the restaurant business.

“This summer’s road trip is now up to four months and our stay in Newfoundland is more than half over.  We both feel like it is starting to wind down some as we begin to plot our course back to the USA.”

— Text and photo by Kevin Justis