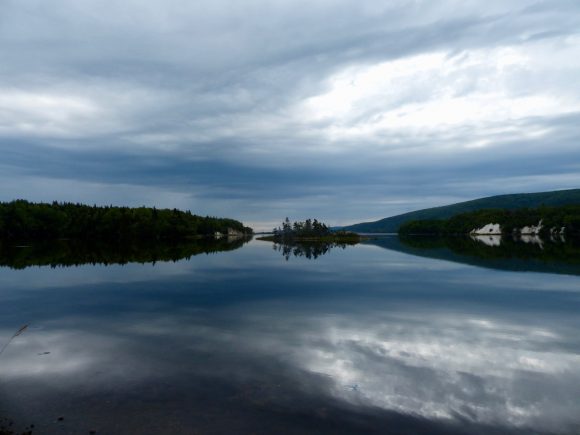 This is the 7th installment of Kevin and Janie Justis‘ ‘Summer of 2017’s Grand RVing Tour of Canada’s Maritime Provinces.’

“To keep from backtracking, we took the ferry from Prince Edward Island to Nova Scotia,” writes Kevin Justis of Rio Rico, Az. “Not too many years ago, a ferry was the only alternative.  From New Brunswick, there is now an eight-mile long bridge which we came across in a dense fog.

“We are almost finished with our week up here on the Cabot Trail, located on Cape Breton in Nova Scotia. I have been impressed with the number of cyclists we have seen riding the narrow roads and sometimes extremely steep hills. It reminds me a lot of Highway 1 along the California coast. The tough riders are those doing it with their heavily loaded paniers. It does seem to me that the drivers are more courteous, but we have chosen to not ride and find out.

“As very well traveled folks, it is hard for us to not be reminded of other places we have been. This area also reminds me of the Appalachian Mountains except there is an ocean next door. Lots of seafood available which we have enjoyed. There are tourists but not overwhelming. The roads continue to be mostly pretty bad and they are in the middle of a lot of construction on the Cabot Trail National Park road. A campground owner said it would have been nice for them to have the project done before they opened all the national parks to free admission.

“Janie picked up another ‘life bird’ on a hike, I think she now has all the woodpeckers.  We are just a few days from catching the ferry to Newfoundland, one of the other main objectives of this trip.”