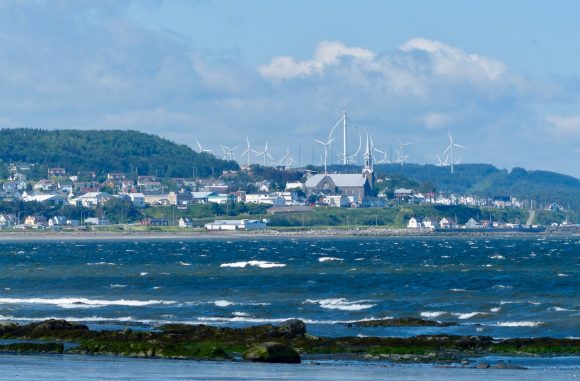 This is the second installment of Kevin and Janie Justis‘ ‘Summer of 2017’s Grand RVing Tour of Canada’s Maritime Provinces.’

“We left Quebec City about a week ago and started our relationship with Highway 132, the two lane road that follows the St. Lawrence River as it flows to the Atlantic.  The Gaspe starts when you can no longer see the other shore,” writes Kevin Justis of Rio Rico, Ariz.

“Right before we left Quebec City, we stopped to do some grocery shopping which we have to do about ever four days due our small amount of storage space.  We left the campground at 7:30 a.m. and quickly learned that no grocery store opens before 8, not even Walmart.  That seems like a walk back in time.  On the road we found a fromage (cheese) shop that was open 24/7.  Not sure I understand but the number one rule of extended travel is be flexible and go with the flow.

“The agriculture was interspersed with what seems like a perpetual village of homes of all sizes lining both sides of the highway.  A few small cities but lots of quaint villages.  The one in the picture (above) is Cap Chat which is a bit more than half way to the end of the Gaspe Peninsula.  Not much to the village but you have to have some claim to fame and theirs is that very large unusual wind turbine which is supposed to be the biggest in the world.

“Our last four days of camping have been right on the shores of the River and have been very pleasant.  We even had some sunshine on several days (and plenty of wind).  This is being written from a campground right across the bay from Cap Chat.  Belatedly we discovered that there is more than just bicycle tours along the River, there are also micro breweries.

“We discovered a map of the 12 breweries along the Peninsula at #7 so we missed the first 6.  We will try to do better.  The oatmeal stout we had yesterday was pretty good.

“Today’s high here was 67 but on the beach it was a lot cooler.  The long pants went on yesterday and may be part of the uniform for a while.”