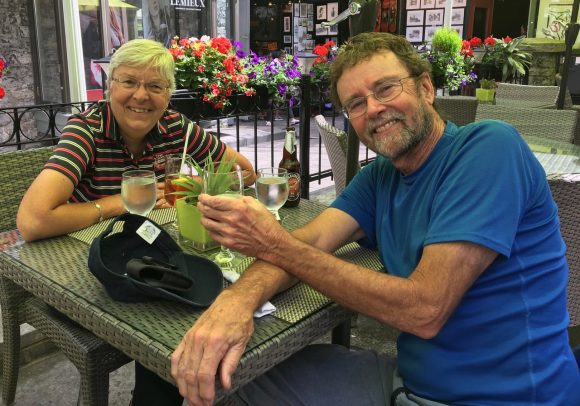 Off and on over the next few weeks, we’ll be posting some of the photos and impressions of Kevin and Janie Justis as they wind through their ‘Summer of 2017’s Grand RVing Tour of Canada’s Maritime Provinces.’

They crossed into Quebec City, Quebec, Canada from Maine, USA, on the first of July.

“We parked our trailer across the St. Lawrence from Quebec City in Levis which is itself an interesting bedroom community to QC,” writes Kevin. “We took the ferry over which gave some nice views of the harbor and city. The Hotel Frontenac still dominates the sky line. It is just huge and you wonder if it is utilized to a significant degree.

#QC did not disappoint, it is very much a European kind of experience, reminded us a bit of Porto in Portugal. We got there early so we had the place almost to ourselves for the first few hours. By the time we left in the afternoon, it was a very busy place.

“We had an excellent and not cheap lunch in a restaurant along the narrow street where a bunch of artists had their works hanging. We almost felt like we were in Paris. The waiter took our picture (see above) and if we look a bit jaundiced, it is because we had a yellow umbrella over us.”

“It was a highly satisfactory day, glad we came back some 40 years later. Now it is on to the Gaspe Pennisula, a place we did not get to all those years ago.”