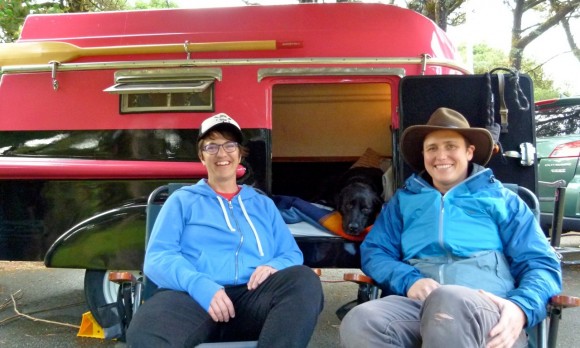 It is estimated that more than 80 percent of millennials are living in urban areas instead of the rural environment of a generation ago. This fundamental shift has helped push the RV industry into producing small, lightweight and more fuel-efficient products.

For their first recreation vehicle, urbanites Meagan Beaver and Alissa Jackson of Portland, Ore., were looking for something lightweight enough to be towed by their 2014 Subaru Outback and small enough to be stored in their backyard.

“We do a lot of camping with friends,” said Beaver, general contractor and owner of Eight Penny Nail construction and remodeling company. “Our favorite camp locations are on lakes, rivers, or on the coast.”

Because they prefer camping near water, they were attracted to a 2013 8-foot Classic American Dream Trailer. This uniquely designed 650-pound fiberglass camper has an attached rooftop rowboat resulting in a small footprint, making it easy to “move, store, tow and row.”

The retro teardrop-style trailer sleeps two and includes a cooking and storage galley in the rear. The rowboat is designed to carry up to “three people or 500 pounds,” or, in their case, two people and a good-sized Labrador-Rottweiler mix named Moby.

When “Alissa, Moby and I took our little hot pink rowboat out for its maiden voyage,” recalled Beaver, “because our dog is big, it took a second to get the three of us situated in the skiff, but once we did, it was so great. I have an electric trolling motor and we were able to explore the lake with silent ease.”

Accountant Alissa Jackson added: “Having the attached boat is a huge bonus to why we chose this trailer.”

To read the complete series on RVing Millennials, click here.