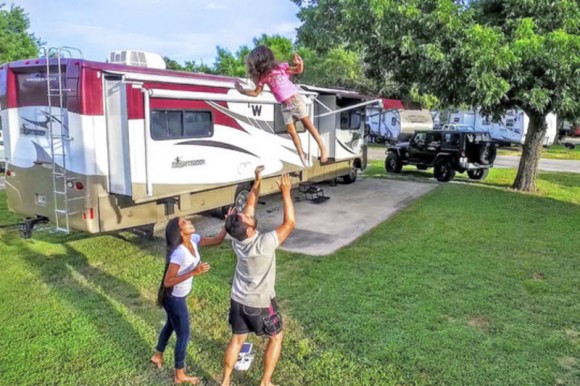 It is said that more than three million employees now work remote. Virtual positions enable a person to work from literally anywhere with Wifi and cellphones — as a result, a growing number of millennials are working remote from their RVs while meandering around the country.

One such young family is Jay and Liz de la Cruz and their young daughter, Khaleesi, of Florida. They “work” their way across the United States in their 2012 38-foot Winnebago Sightseer motor coach. To make exploring local sites easier, their tow a 2015 Jeep Wrangler Sahara, “with nifty upgrades and accessories ready for all terrain,” said Liz de la Cruz.

“RVing is a great family-oriented lifestyle,” she said. “It creates a healthy environment for families to unite and re-connect.”

Younger RVers seem to appreciate the RVing lifestyle for much the same reasons as baby boomers and the old timers.

“RVing provides a home on wheels which makes it easier when traveling in comparison to airplanes, trains or automobiles,” said de la Cruz. “You have everything you need with you, all the time.”

The next and final installment in this 5-part series on RVing Millennials features filmmakers Heath and Alyssa Padgett, both 25, who have been RVing full-time for two years.

To read the complete series on RVing Millennials, click here.

Photo: For more than a year, Jay and Liz de la Cruz along with their 3-1/2 year old daughter, Khaleesi, have been traveling full-time in a 2012 Winnebago Sightseer 37L. (Courtesy of CruzingwiththeCruzes.com)