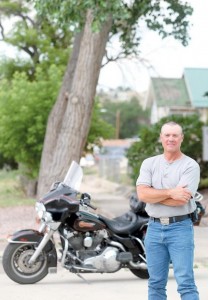 RVs are often used in many different ways. This time as a mobile office for veterans’ advocates in Wyoming who are reaching out to vets returning home from Iraq and Afghanistan to link them to medical, mental health and financial services.

Leon Chamberlain bought a small motorhome because he wanted “a quiet, private place where soldiers would feel comfortable” talking with him.

“A motorhome also comes in handy when (Chamberlain) is in rural parts of the state and he needs a place to sleep,” wrote Allison Rupp in the (7/26/2008) Casper, Wyoming, Star-Tribune. “The veterans advocate didn’t want any barriers to reaching a soldier.”

AN UPDATE: Allison Rupp wrote an update (7/28/08) on Chamberlain who is now waiting for deployment to Iraq. The Wyoming National Guard wants Chamberlain to deploy with them as a health professional to help soldiers deal with combat, death or even things happening back home.

Read more in “Leon Chamberlain on front lines of outreach”

Photo: Leon Chamberlain stands in front of his Harley Davidson that he often rides around the state for his job as a veteran advocate. Photo by KERRY HULLER, Star-Tribune