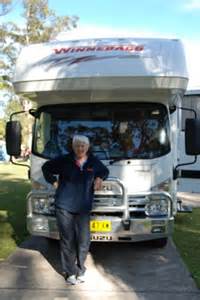 Winnebago is conducting an RV Fuel Consumption Run from the Gold Coast (Australia) to Winton Raceway in Victoria to prove that motorhome travel can be almost as economical as driving an average family car,” according to an article published in the Coffs Coast Independent in Coffs Harbour, New South Wales.

Four motorhomes of various sizes are stopping at towns along the way, inviting people to look at the RVs and meet the convoy team, including legendary Australian Olympic gold medalist, Dawn Fraser, 70, a long-time RV fan and spokesperson for Winnebago.