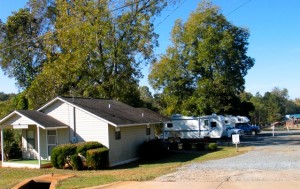 Americus, Georgia, was one of the primary stops I was looking forward to on this six-month RV trip circumnavigating the U.S.A.

Almost 20 years ago I volunteered to work in the Habitat for Humanity‘s public relations department during its 15th year celebration.

It was a defining year for me–from the time I arrived in 1991, just a couple of weeks before the Jimmy Carter Work Project in Miami, Florida–to the time I left, shortly after the 1992 JCWP in Washington, D.C. where the first Women Build house was constructed at a JCWP. It was a personally powerful time for a much younger me who helped organize and build that house.

That was also about the time that Habitat was building its new RV Park for volunteers who come to Americus with their own recreation vehicles. 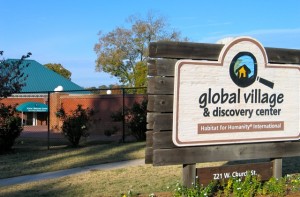 On our trip this year we had an opportunity to stay at that 5-site RV Park. It is located only a couple short blocks from the Habitat Headquarters’ building and the popular Global Village and Discovery Center complex where the RV Care-a-Vanners office is located.

The Discovery Center tells the story of Habitat for Humanity, including its founding by Millard and Linda Fuller in 1976 after their experience building simple, decent housing with Clarence Jordan and others at Koinonia Farm. 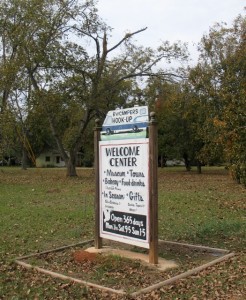 Koinonia (Greek for loving community) was founded in 1942 as an intentional Christian community.

“Koinonia has nearly 65 years’ worth of history—Clarence Jordan, the civil rights movement, local African American history, the birth of Habitat for Humanity and other organizations, involvement in many peace and justice movements, community living, and agriculture,” according to it Web site.

Koinonia is only a few miles southeast of Americus along GA Hwy 49.

People are welcomed to visit. There are “RV hookups, delicious Southern meals weekdays at noon, organic blueberries, grapes, and other produce. Coupled with their numerous pecan orchards and miles of walking trails, Koinonia is an ideal setting for individual and group trips or retreats of any type.” 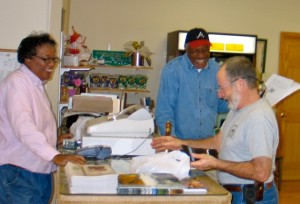 We left with a pound of Cinnamon Spice Pecan Halves, two small Pecan Pies and a couple other bakery items made on location from products grown on the Farm. Check out the mail order catalog by clicking here.