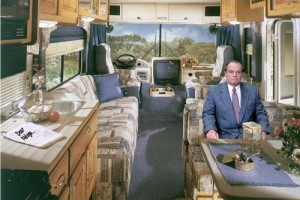 Test your knowledge of RV film lore …. try your memory on this quiz based on one originally created by the Recreation Vehicle Industry Association.

When it came time for the recently widowed Jack Nicholson to hit the road in “About Schmidt” (2002), he does it in his new recreation vehicle. As Warren Schmidt, Nicholson drives his Winnebago Adventurer motorhome from Omaha to Denver on a journey of self-discovery.  The RV become one of the film’s prominent images. (Even though this film received only a 7.2 rating by one ratings group, I found it to be pretty funny.  Nicholson was great as usual.)

Test your knowledge of 10 other movies featuring RVs. Some of these are pretty obscure. Match the title to the description: 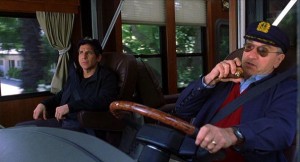 a. A former CIA agent (Robert De Niro) uses a hidden command center in his tricked-out RV to secretly test a hair sample taken off his future son-in-law (Ben Stiller).

b. An animated family travels the African plains in their high-tech, gadget-filled RV, while their daughter is stuck at a stuffy boarding school.

c. Bill Murray goes behind the Iron Curtain in a top-secret RV.

d. Clint Eastwood hits the road in his RV in pursuit of a prison escapee and an eight-year-old hostage.

e. Jennifer Aniston and Jason Sudeikis star in file about “A veteran pot dealer creates a fake family as part of his plan to move a huge shipment of weed into the U.S. from Mexico.”

f. As one of three female private eyes, Lucy Liu lives in an RV while they track down a kidnapped electronics genius.

g. Will Smith combines forces with patriotic citizens in RVs to save the planet from aliens.

h. In their specially designed RV, scientists Jeff Goldblum and Laura Dern encounter danger with T-Rex and other prehistoric beasts.

i. In this classic, Lucille Ball and Desi Arnaz buy an RV so they can live together while his job takes him around the country.

j. Albert Brooks quits his fast-paced corporate job, buys an RV and goes on the road to a new life.

Photo: “About Schmidt” with Jack Nicholson; Meet the Folkers with Ben Stiller and Robert De Niro.