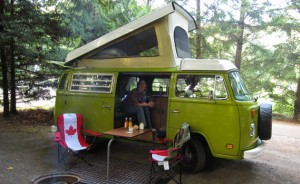 According to an item on CBC online news: “Many Parks Canada campgrounds were built in the 1950s but with one in five Albertans now owning an RV, Parks Canada spokesperson Thiessen says the demand is for improved facilities and larger campsites.”

Officials are considering freeing up space at quieter national parks campgrounds to meet the growing demands of people who now own bigger-sized Recreation Vehicles. To read more click here.
#
Photo: While VW vanagons can easily fit into most of Canada’s national parks’ campsites, Parks Canada is considering ways to make parks more accessible for larger-sized RVs. (Submitted by Carly Macoun)