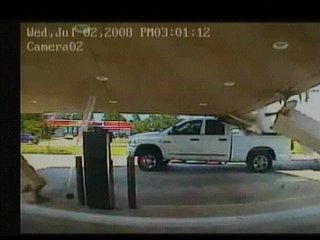 A bank surveillance camera caught a Texas man (towing his brand new fifth-wheel trailer) when he suffered a momentary lapse in judgment.

“He was not trying to drive under the awning, he was attempting to go around the awning but caught the awning,” said Center (Texas) Police Department Officer Gratehouse, according to a KLTV report.

Ironically the driver was going to that bank to sign the paperwork on his new 5th wheel-trailer. Neither the driver, nor his 10-year old son, both in the truck’s cab, were injured.