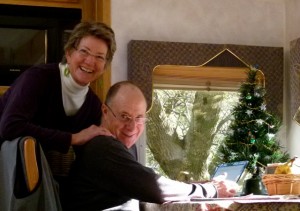 This time last year (2010) we were camped next to Lake Seminole on the border between Georgia and Florida camping in Corps of Engineers’ Eastbank Campground where the designated cook, Jimmy Smith, spent most of the day roasting a hen in his treasured Dutch oven.

In 2009 we camped within a stone’s throw of Mexico in Big Bend National Park, and shared a Thanksgiving Dinner with a couple from Maine. Jimmy made his signature ‘beer can’ chicken over the BBQ.

This year we attended the SKP Park of the Sierra’s traditional Thanksgiving Dinner in the community hall. For only $3/each we got turkey, stuffing, rolls and gravy. Dinner ‘guests’ brought a side-dish, salad or dessert (enough for eight). More than two hundred people attended, it was one grand pot luck dinner.

Chef Jimmy baked his version of the ‘Sweet Potatoes with Ancho-Maple Glaze‘ recipe found in the November 2011 edition of ‘Country Living.’

Dinner was set to begin at 4 p.m., we showed up at 3:45 and almost all the tables were full. Being on time for dinner here, means arriving at least 30 minutes early.  It was fun.