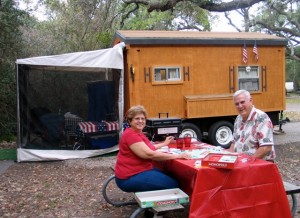 Janet and Stan Harper were playing a spirited game of Monopoly when I walked by their site at Goose Island State Park on the Gulf of Mexico, northeast of Rockport, Texas.

What compelled me to interrupt their good-natured battle over who owns Boardwalk was their unique ‘Cabin on Wheels’ — their own creative pop-up-cargo-trailer conversion.

“Our old Coleman pop-up camper was getting so tattered it needed replacement,” says Janet. “We also had a cargo trailer that was used when we were doing craft shows; and, we thought it would more economical to combine them than to purchase a travel trailer.”

And what a sweet result.

The Harpers, of Floresville, Texas, (about 25 miles south of San Antonio) took about two months to complete their project. 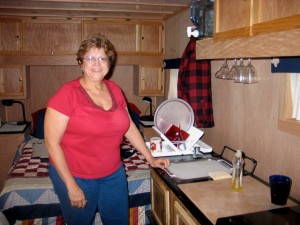 They incorporated a number of design touches from their past ownership of power and sail boats–including recess shelves, a collapsible counter top, and numerous, hidden, stowaway spaces. The interior also incorporates the sink/stove top cabinets salvaged from the pop-up. All additional cabinets were made from Luann plywood and cedar by Stan and Janet.

Other interior features include a refrigerator, microwave and porta-potty. The wood frame has insulated walls, finished with Luann and cedar.

The outside cabana area includes the pop-up’s screens and tables. “We used as much as we could from both the cargo trailer and the pop-up,” says Stan. “It’s very heavy, but I can easily pull it with my 3/4-ton Ford.”

The Harpers own Cruises Creating Memories and can book cruises with “any accredited cruise line anywhere in the world,” says Janet. “Don’t think because you live in another state that you cannot book with us. We’ll give you the personalized service you’ll appreciate.”

Photos: (Top) Janet and Stan Harper with their ‘Cabin on Wheels’. (Bottom) Janet shows off the interior of their conversion. Click on images to enlarge. (Julianne G. Crane)