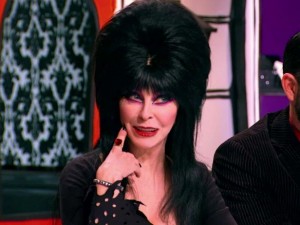 Elvira, Mistress of the Dark–that Halloween icon and quirky symbol of all things spooky–guest stars on this month’s Food Network’s ‘Halloween Wars.’

Season 5 of Halloween Wars is set to begin Sunday, Oct. 4 (premiering at 9 p.m. ET). This fright-night celebration features five teams of Halloween cooking warriors who will be facing off for the chance at a “whopping” $50,000.

One of the guest judges will be Elvira, Mistress of the Dark.  I interviewed her several years back when I was writing a weekly RV column for The Spokesman-Review newspaper in Spokane, Wash.

Of course Elvira wasn’t exactly a typical RVer.  However, I was not beyond stretching a point when it came to the Mistress of the Dark. I wanted desperately to interview her–she was hugely popular during the 1980s after she premiered her late-night, off-the-wall horror movie show in Southern California where I was living at the time. The show soon took fire and went on to be nationally syndicated.

Back to RVing, Elvira’s alter ego, Cassandra Peterson, did made one trip in a motorhome and used RVs during the filming of her Elvira movies–so I considered that good enough.  (At this point, I must give RV University’s Dawn Polk credit for being the essential ‘go-between’ … she and Cassandra Peterson are cousins.)

Read about Elvira’s RV experiences in one of my favorite all-time articles — “Elvira not immune to life as a roadie” in The Spokesman-Review.