It was a heart-stopping moment when I first spotted a family of Whooping Cranes making their way across the south Texas sky. With a slow wingbeat, they gracefully circled, then glided ever-so-gently onto a marshy field just north of Goose Island State Park and south of the Aransas Wildlife Refuge.

The endangered Whooping Crane is one of the rarest birds in North America. All of the whoopers alive today (biologists estimate there are more than 250 birds in the wild flock) are descendents of the last 15 remaining cranes that were found wintering in Texas in 1941. Biologists believe the Aransas-Wood Buffalo population must have at least 1,000 individual birds and 250 reproductive pairs before the species can be considered for down-listing under the Endangered Species Act. 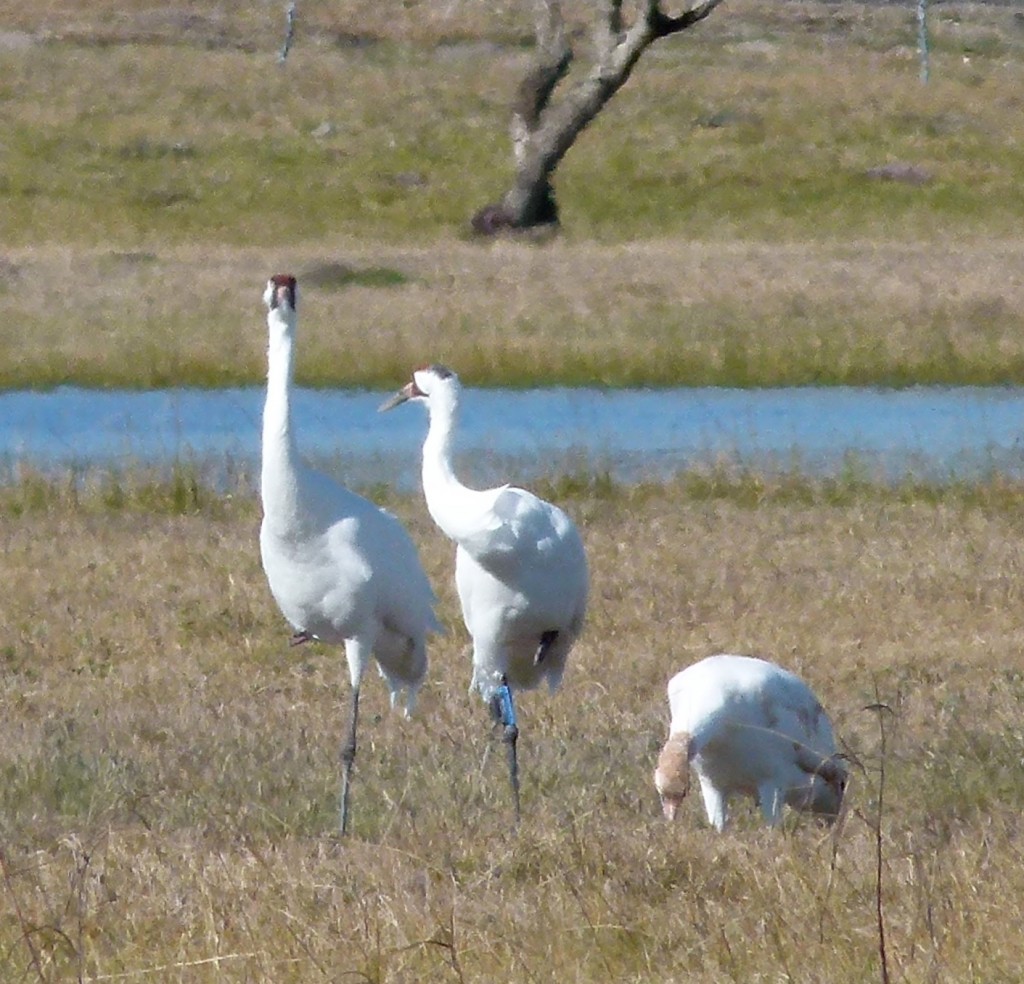 They are also the tallest of birds in North America, with adults standing nearly 5-feet tall and having a 7-foot wingspan.  These magical birds mate for life and can live nearly 30 years in the wild. Adults have snow-white plumage with black wingtips. Juveniles have a mixture of white and brown feathers, also with black wingtips.

These Winter Texans are part of “only one self-sustaining population” that “survives in the wild,”  according to the U.S. Fish and Wildlife Service.

They migrate 2,500 miles twice annually, returning in the spring to nest in Wood Buffalo National Park in the Northwest Territories of Canada. They do all of this in small flocks of 2 to 8, sometimes traveling with Sandhill Cranes.

According to the Dec. 17, 2014 U.S. Fish and Wildlife Service survey: “While coastal salt marsh was the most common habitat type that we observed whooping cranes using during the survey, we observed whooping cranes using a wide variety of other habitat types as well including freshwater wetlands, upland prairies and shrublands and open-water bay edges.”

As this information was tumbling through my mind, another observer at this roadside viewing place, a wildlife photographer, mentioned that he had a spotter scope focused on three resident cranes, if I wanted a closer look.

I peered into the telescope and gasped, “Oh my,” as the adult male’s profile popped into view — his brilliant red crown, bright yellow eyes and regal bearing were truly breathtaking. For another amazing minute I marveled at these incredible creatures before reluctantly tuning over the telescope to the next eager visitor.