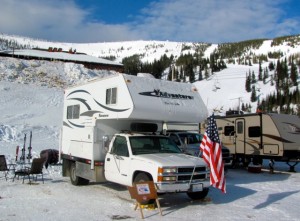 Truck campers are also popular with young families, like the Bain Family of Colbert, Wash. (thetclife.com). They purchased their 2010 ALP Adventurer 810ws because of its amenities. For their truck they selected a 1999 Chevy 3500 dually with a 12-foot flatbed.

“We wanted to use a flatbed so we could store all our camping goodies in the sides,” said Bain, a member of North American Truck Camper Owners Association. “We also liked the longer bed so that there is a small porch out of the back of the camper.” 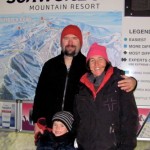 “Don’t think that just because it’s a truck camper that you have to give up a lot. In fact you gain more. The ability to go almost anywhere is such a big advantage,” said Bain.    One of the family’s favorite winter destinations is snow skiing in North Idaho. “We parked right next to a ski run and really did ski in and ski out,” said Bain.

Manufacturers offer a range of floor plans that maximize living area. Many models also have slide-outs, which move the RV wall outward up to three feet to create larger living areas.

“Actually go inside a camper and look around,” suggested Bain. “Don’t just judge them by a quick look outside. You would be amazed at how much living space there is in a truck camper.”

Also read:  “Truck campers, Part 1: Off the beaten path in comfort“
Next, in Part 3, we learn how RVers who love boondocking prefer truck campers.

Photos: (Click on images to enlarge) Rich, Joanne and Cody Bain of Colbert, Wash., use their 2010 8.10-foot Adventurer truck camper for skiing trips to Schweitzer Mountain in Idaho. (Courtesy of Rich Bain).