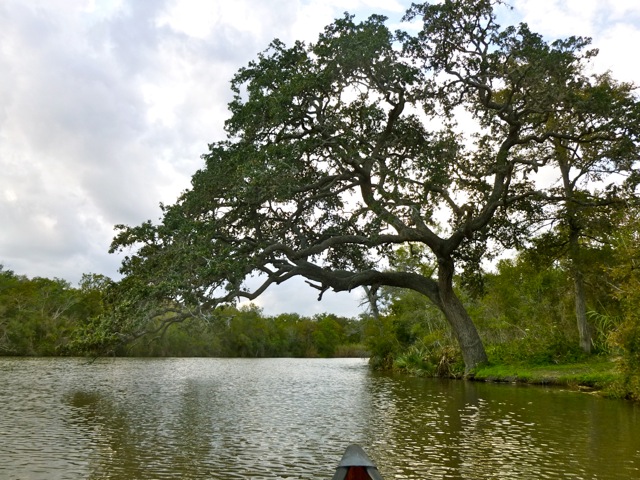 We figured we stumbled into Texas’ Palmetto State Park early enough in the day (around noonish) to secure an RV site (one with hookups) without having reservations. Well we were wrong. On two counts. Palmetto is a unique park and one with very few (only 18) hook-up sites–and, on top of that it was a Saturday. Oops. We had lost all track of what day of the week it was.

A quick conversation with one of the park rangers let us know there were still ‘tent’ sites available (water only) for $12. Yippee. One of the reasons we love RVing in a truck/camper combo is the small footprint … we can camp wherever the truck will fit. 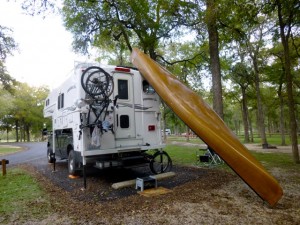 Within a few minutes we had backed into our site near the park’s Oxbow Lake that was once part of the San Marcos River. We soon had our 18-foot Wenonah Champlain canoe off the camper and headed for the lake.

It was only after we launched and paddled a few strokes that we realized it was a fairly small ‘lake’ … measuring only about four-acres on a really good day. It took us about 7 minutes to circumnavigate the lake. While Oxbow is a tad small for an invigorating canoe float, it seemed perfect for the  4-person pedal boats rented by the park.

The park also features many structures built by the Civilian Conservation Corps in the 1930s. In fact there was a wedding taking place in the CCC Refectory that emphasized the park’s natural features. “Named for the dwarf palmetto plants found throughout the park, this 289-acre riparian refuge resembles the tropics more than the surrounding brush country.”

Located on the Great Texas Coastal Birding Trail, Palmetto State Park is known as a “hot spot” for birding opportunities with over 240 species observed within the park’s boundaries.

During the Busy Season (March to November). Overnight guests are advised to make reservations at least 2 to 3 weeks ahead of time. Reserve by phone: (512) 389-8900 or online by clicking here.