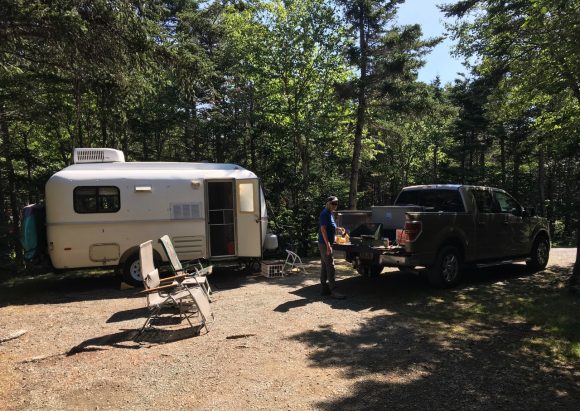 This is the 11th installment of Kevin and Janie Justis‘ ‘Summer of 2017’s Grand RVing Tour of Canada’s Maritime Provinces.’

This post finds Kevin and Janie Justis of Rio Rico, Ariz., about ready to leave Newfoundland for Nova Scotia. They take a few minutes to reflect on the practical costs of the trip.

“Provincial Parks in Canada are the equivalent of State Parks in USA. We have generally found them to be desirable places to stay. The camp sites are generous in size with decent privacy (Cheesman was definitely crowded).

“If you ask,  you will get a senior discount even though there is no reciprocity when Canadians visit the States. A non-electric site was a very affordable $13 at Blow Me Down Provincial Park. If you want electricity, you should probably make reservations. There is a $10 non refundable fee for making a reservation.

“Most parks had at least one decent hiking trail. You do have to pay for showers at many campgrounds up here but we do not remember doing so at the PP’s. There is generally only one comfort station (showers and flush toilets) but in most of the parks they augment them with outhouses that are generally very clean. The latter at Blow Me Down were immaculate. The sites and roads are mostly gravel.

“In the bigger towns, groceries were semi-reasonable but most of the Province is very rural and the small stores are definitely more expensive. Eating out is clearly a luxury if you are on a budget.

“In some ways Newfoundland reminded me of Alaska, there is a huge amount of road-less areas and only the Trans Canada Highway that traverses it. Expect rough roads, particularly the secondary roads. We turned back on one because it was so rough even though it was allegedly paved. If you see the sign for ‘Bump Ahead,’ slow down.

“Beware that the ferry is darn expensive, particularly the longer one at the east side of the island. It would make sense to travel east-to-west or vice-a-versa, but you can drive across the Province in two days. I would highly recommend reservations although I had a friend who did it a few years ago without them.

“We thoroughly enjoyed our stay in Newfoundland and very glad we did it despite some problems with our four-year old truck.”