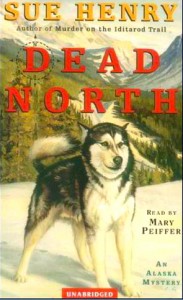 I’ve been re-listening to an audio tape of  “Dead North,” (2001), a novel featuring musher Jessie Arnold, made famous in Sue Henrys first book “Murder on the Iditarod Trail” (1991).

Because of Maxie’s popularity in that book, Henry went on to create a series of novels featuring this savvy widow who solved mysteries while traveling in her Winnebago.

In the first of the series, “The Serpents Trail” (2004), “Maxie discovers that she loves the freedom of the road, and that she’ll do just fine …  that is until she reaches Colorado Springs where her terminally ill friend Sarah has a secret to tell her, but lapses into semi-conscious delirium soon after Maxie gets there.”

In “The Tooth of Time” (2006) Maxie becomes involved with a mysterious woman in Taos, New Mexico. Along the way she takes site-seeing treks of the Great Sand Dunes National Monument in Colorado and the “The Tooth of Time,” an impressive landmark, near Cimarron, N.M. 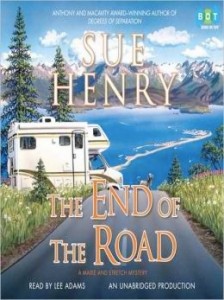 “The Refuge” (2008) features Maxie, this time in Hawaii. “After nine months on the road, Maxie is ready for some R&R, Alaska-style. But no sooner has she parked the Mini-Winnie than a pleading phone call sends her flying to Hawaii to help a friend hobbled by an accident. But within hours of Maxie’s arrival, a prowler tries to break in and someone sabotages the plumbing” … then ….

“The End of the Road” (2009) features a “drifter who has no friends, but is so engaging that Maxie invites him over for dinner. The next day he moves on-and is later found dead in his motel room. What looks like a simple suicide quickly grows more complicated when police discover that he was living under an assumed identity. Maxie tries to fathom why he would choose to end his life … and just might meet a dead end of her own.”