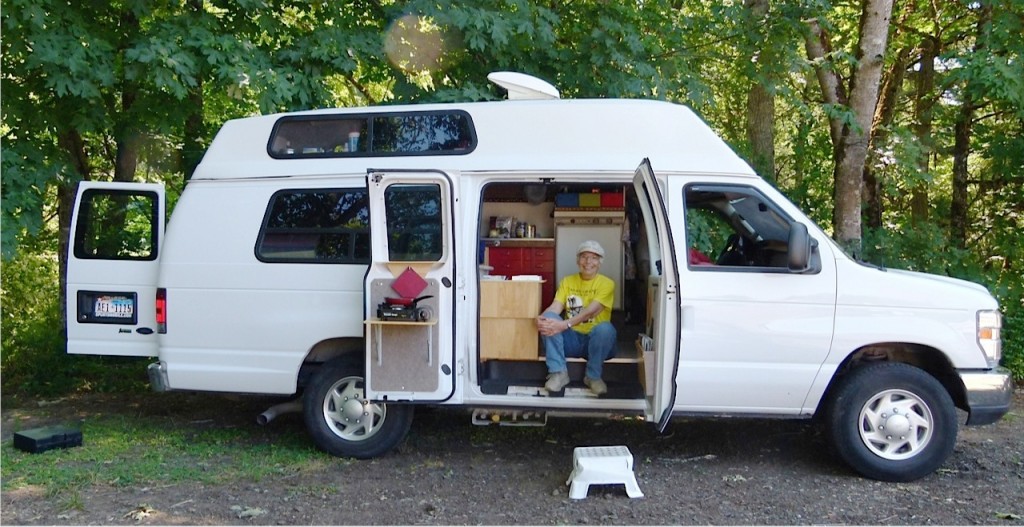 One of our longtime full-time RV friends, Kate Bright, pulled into the Escapees’ Timber Valley RV Park in southern Oregon to catch up with Jimmy and I — not just once during this summer’s traveling season, but twice.

The first time was in June when she was heading north on an annual RV journey to see her daughter’s family in Alberta, Canada. Our second “gathering around the campfire” was just recently when she was heading south to her homebase at the Escapees’ Park of the Sierra in Coarsegold, Calif. 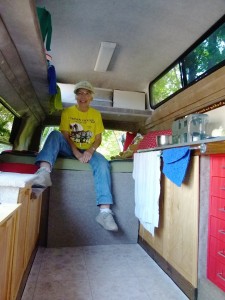 At Park of the Sierras, Kate lives in a 5th wheel trailer. When she travels, it is in ‘Little Daisy,’ her 20-foot 2012 Ford e250 van. Some of her favorite memories come out of exploring small secondary roads and stumbling onto unexpected places.

“It’s tough to name just one special spot,” she says. “There are so many great places. I usually like the ‘sleeper’ parks.  I don’t know what to expect from them, and I am frequently pleasantly surprised.  Additionally, they are usually sparsely visited, and it’s easy to get a campsite.”

Kate began converting her traveling pod in Spring 2013 and has been tinkering with it ever since.

One of the most recent additions to her on-going project is a door table (see top photo, click on it to enlarge). “It has proven to be very useful,” she says.  “The folding metal braces can be found in many hardware stores and online.  Depending on size, they range from about $7 to $30+ per pair.  I use the table mostly for my portable stove.” 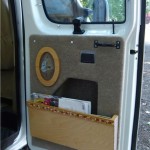 Another addition to the van is the fitting out of the other side door (photo right, click to enlarge). “Because it had a couple of big cubbyholes in it,” says Kate,  “this became a natural spot for some kind of storage.  The upper hole was designed to house a speaker, and that became my plastic bag storage.  The larger cubby hole became the space to house magazines and atlases.  I added a magazine rack to expand the storage there.”

During the trip, Kate’s water pump went out on her. “I will probably fix it eventually,” she muses. “But I have to admit, using the 2-gallon containers with spigots works just as well, and they are lots easier to refill.  I’m in no hurry to change that.”

There are a few more little things that still need doing, she admits, “however I don’t know exactly what I want yet, so I am still in the thinking stage on those.  It’s a lifetime project, ya’ know.”

(Read more about Kate, her van conversion and advice to solo women RVers by clicking here for an article I wrote for WomenRVers.blogspot.com)