It was a late Friday afternoon and we were heading on a quickly planned trip into eastern Oregon and had hoped for a ‘walk in’ site at the LaPine State Park, just south of Bend. Anyone who has ever stayed at this extremely popular campground that sits on the banks of the Upper Deschutes River, especially at the start of a hot summer’s weekend, knows what a fool-hearty wish that is. The park, of course, was full. We continued our trek east along U.S. Highway 20 into the high desert.

We remembered the Chickamominy Reservoir Campground managed by the Bureau of Land Management, 32 miles west of Burns–about another three-hours drive. We arrived after 8 p.m., and because of the long summer days there was plenty of light to easily set up camp and stretch our legs with a walk around the campground.

There were about a dozen tent and RV campers scattered among the 28 designated dry-camp sites. Camping is also allowed in undesignated areas around the reservoir. According to the camp host, after a couple of years of drought, last year the reservoir was down to almost just a puddle.  This past year’s moisture has the water line up, but still down about 12 feet from normal. 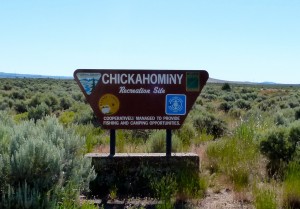 Fees:  $8 fee is per vehicle, per night. Able to accommodate both tent camping and recreation vehicles (no RV hookups). Restrooms, drinking water available.

(Remember with ‘American the Beautiful – National Parks and Federal Recreational Lands Pass’ camping is 50-percent off stated fees.  We paid $4 for our one-night stay.)

Directions: Chickahominy Reservoir is located on U.S. Hwy 20 between Bend and Burns, Oregon, at milepost 100, turn north onto the entrance road.