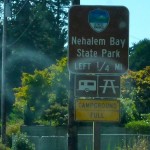 We arrived at Nehalem Bay State Park on a Sunday afternoon around 3 p.m. with no reservations, thinking surely with more than 300 campsites there would be walk-up sites available. That was until we saw the “Campground Full” sign along Hwy 101.

As we rolled up to the check-in booth there were three parties in front of us. Two couples tent camping and one solo woman traveling in her own version of a VW van. They all got spots.

I tentatively stepped up to the ranger’s window, admitted we didn’t have a reservation and asked if anything was available. He looked at me briefly, checked his computer and declared: “I only have one site left for tonight.” Relieved, I smiled and quickly handed over my credit card.

Nestled between the ocean and the bay, this extremely popular family campground is situated on a 4-mile long sand spit. One reason for its popularity, in addition to being on the scenic northern Oregon coast, is that it is only a couple hours (86 miles) drive west of Portland.

“Situated among a sea of shore pines, the campground borders rolling dunes that separate the campground from the beach. A walk over the dunes and you’re at the beach building sand castles, flying a kite or relaxing to the sound of the ocean. Beach-combing can produce special rewards – treasures that include agates, shells, and occasionally glass floats. End the day with a sunset over the ocean in the shadow of Neah-kah-nie Mountain,” says Oregon State Parks. 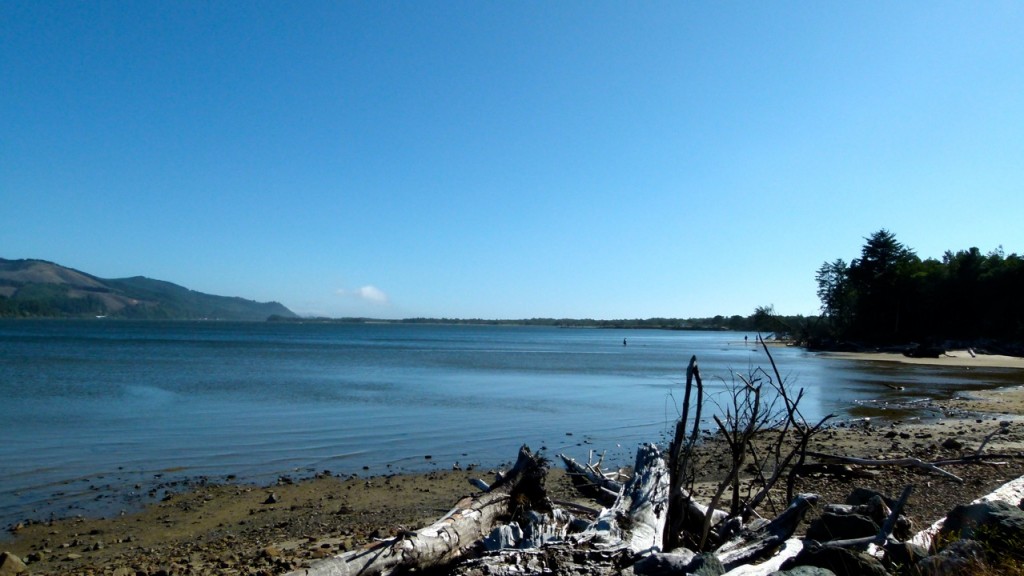 After setting up camp, we pedaled the forested 1.8 mile bike path that circles the campground. One stretch runs along Nehalem Bay (left).

It is said that campers might see deer, a herd of elk, a lonely coyote or two and a variety of birds. Kayaking, crabbing, fishing and clamming are also popular pastimes.

This public campground is also unique because of its variety of campground facilities. 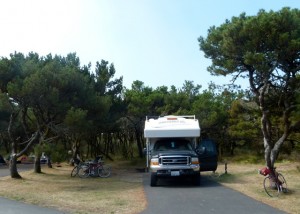 – There is a 2,400 foot airstrip that offers an opportunity for fly-in camping. We saw a couple small planes take off over the bay.

– Near the entrance to the park, a wooded area has been set aside as a walk-in campsite for hikers and bikers traveling up and down the coast highway.

– A circle of 18 yurts are available as an alternative camping experience for those traveling by car.

– In addition, there are 17 primitive sites with corrals that offer horse enthusiasts a place to camp with several miles of trails and beach to explore. 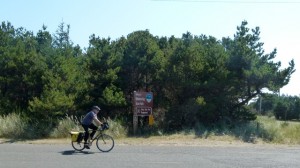 It seems that at least half of the camp sites have multiple tents, with up to eight people (the maximum per site). And talk about dogs, there is a constant parade of very well-mannered canines.

We asked the rangers about bicycling into the neighboring community of Manzanita and they directed us to a paved bicycle/walk path.

Reservations online can be reached by clicking here. (add $8 per reservation)

We checked back with the rangers at 9 a.m. Monday morning and snagged a different site for two additional days.

Photos (click on photos to enlarge):  From the top: “Campground Full” sign; Looking north along Oregon Coast from sand dunes at park; Nehalem Bay; Site F-41 with electricity and water; and Jimmy Smith bicycling around the park. (Julianne G. Crane)