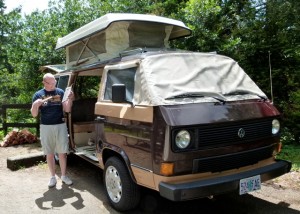 Before finally setting up camp at Umpqua Lighthouse State Park, Loop C, spot 45, Jeff Brown of Eugene, Ore, had tried and failed twice to reach the Oregon Coast. “Both times had to be aborted because of engine trouble,” said the Air Force Veteran and current logistics and warehouse manager.

The first time, “Fae,” his 1984 Volkswagen Vanagon GL (with a Country Homes Camper conversion) got within ten miles of the park when the engine started to overheat.

After towing the van, installing a new radiator and purging the air from the cooling system, Jeff claimed success and set out again the following weekend–but only managed to get about 25 miles before Fae again began overheating. “Little did I know that two of her internal head gaskets where leaking …  allowing exhaust gases to be forced into the cooling system, displacing the water and causing rapid overheating, which led to total engine failure.”

Subsequent to a $4,000 engine rebuild, Jeff called his buddy Daniel Flores (who drove down from Portland) to met him in Eugene where they loaded the van, and finally completed Fae’s maiden voyage on the third attempt. 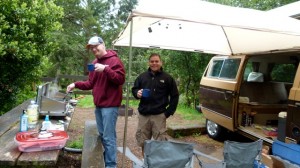 “This is my first camping experience,” said Daniel. “Jeff drove us down Hwy. 101 to visit various state parks, three lighthouses, a couple of harbors, and beaches. I enjoyed seeing the sand dunes, hiking, and making new friends sitting around the campfire drinking our favorite drinks, chatting and laughing. It was a great experience something that I will always remember.”

Jeff said his longtime “love of the outdoors comes from camping with my parents in the camper we’d sometimes borrow from my grandparents.”

Later, “my friends and I really got into camping and the outdoors at my first duty station, Mountain Home Air Force Base,” Jeff added. “Mainly it was an excuse to be at the lake first thing in the morning to water ski.  It evolved from sleeping in the boat with a tarp over it, to tents and backpacks, and finally to a restored 1969 Teardrop camper on the back of a 1969 Chevrolet C/10 pickup (that I restored with my father), towing a 1965 Chris-Craft Cavalier 16-foot Custom Ski with a 300 horsepower 327 V8 that was borrowed from a 1968 Camaro.  We were the coolest kids at the lake, for sure.”