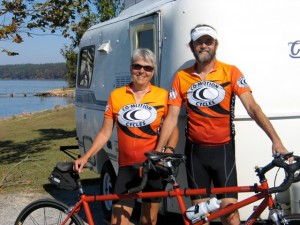 Jane and Kevin Justis, of Susanville, Calif., have been “in tandem” since 1967. They have been riding a tandem bike for about six years.

Previously the retired couple lived in Billings, Mont., for 17 years where Kevin was a social worker and Janie taught school.

This is their 4th winter of snowbirding and have almost 500 nights in their cozy home on wheels.

“The secret to enjoying such close quarters,” says Kevin, “is to lower your standards for privacy and try to keep it as simple as possible.”

In addition to the tandem, they carry three other bikes which “does make it a bit complicated,” adds Kevin.