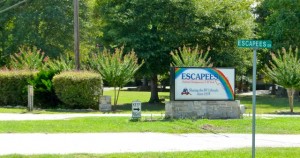 After leaving the Pineknot Molded Fiberglass RV Gathering, in Crocket, Texas, we headed southeast toward Rainbow’s End RV Park — the headquarters of The Escapees RV Club. The club was founded on July 4, 1978, by Joe and Kay Peterson to help people enjoy full-time RVing. 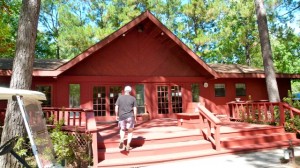 Thousands of volunteer members play a major part in the Escapees’ success story. They helped build the home-base parks and perform many tasks that enable the parking fees to remain low. There are more than 50 individual Escapee chapters around the USA with more than 32,000 member-families — including us.

We had heard and read so much about Rainbow’s End that it has long been on our “must-visit” list.  I called ahead to confirm there were drycamp spaces available ($5/night for members) and that the Dallas Cowboys / Denver Broncos game was being televised in the Club House.

Friends from Escapee Park of the Sierras

Immediately after the above picture was taken of Jimmy climbing the steps to the Club House, we opened the door and seated directly ahead of us was Marianne Seals, a former neighbor at the Escapee Park of the Sierras in Coarsegold, Calif. 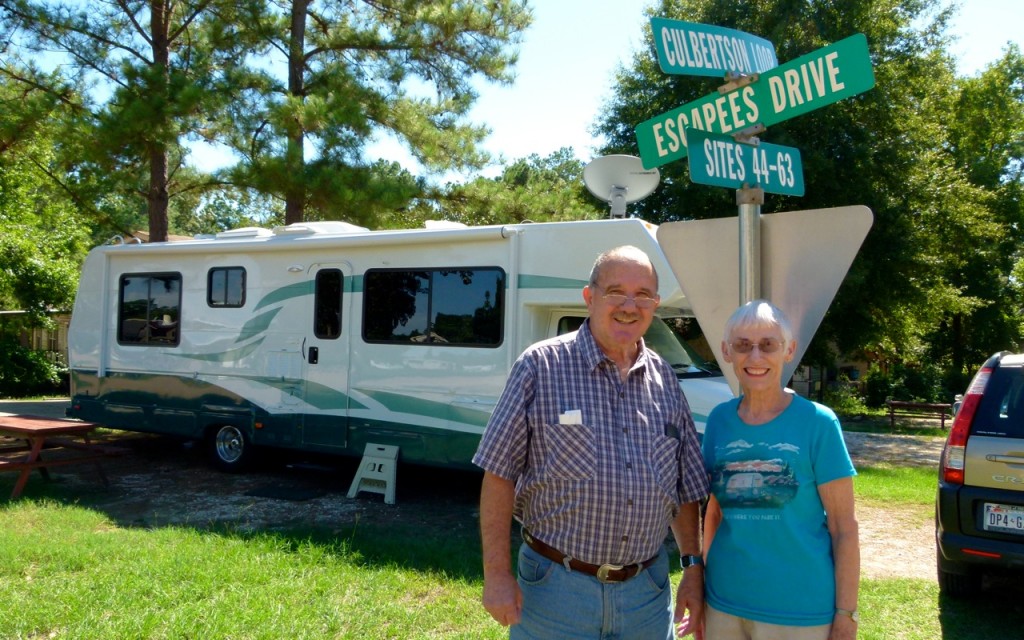 It has been six months and many thousands of miles since we last saw Marianne and John Seals (right) at Park Sierra, south of Yosemite National Park.

Since then, they have traveled to the Middle East (where they had a few nervous moments in Cairo and rode camels in Morocco), purchased a new 2012 31-foot Lazy Days class C motor home, and are now on an extended meander of the Sun Belt states. John is looking forward to some Cajun home cooking in Louisiana.

After retiring in 1995, the Seals became full-time RVers with their current home base at Park Sierra. They didn’t limit their travels to RVing North America, and have joined dozens of tours that have taken them to a total of 32 countries around the world.

“China was our favorite,” said John, a retired land surveyor. “Followed  closely by two trips to southern Africa,” added Marianne. “It was just like the movie, ‘Out of Africa.’ Amazingly beautiful.”