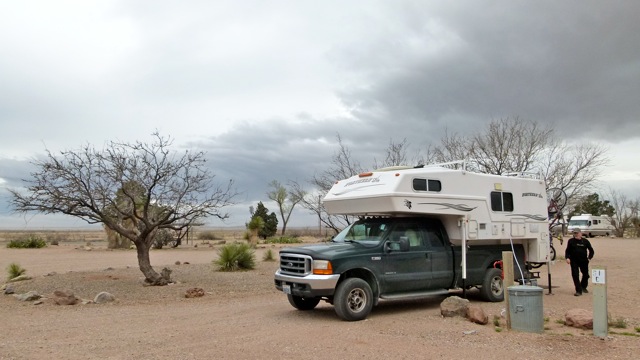 We first camped at Pancho Villa State Park in Columbus, NM., in December 2009 during our first season out. It sits just three miles north of the Mexico boarder.

This desert campground was recommended to us by RV Care-A-Vanner friends Janet and Paul Ohri of Kremmling, Colo., whom we met on a Habitat for Humanity build in Las Cruses, NM.

On this visit we arrived in mid-afternoon to find most of the perimeter spaces occupied by larger class A motorhomes/coaches and 5th wheel trailers. It is a popular destination for retired RVers who want to visit dentists in Puerto Palomas, Mexico.

The park is on the grounds of former Camp Furlong from where “Gen. John J. ‘Black Jack’ Pershing launched 10,000 troops on an (unsuccessful) 11-month, 500-mile pursuit of Pancho Villa into Mexico.”

It seems that on “March 9, 1916, soldiers led by Mexican Gen. Francisco “Pancho” Villa attacked the military camp at the sleepy border town of Columbus, New Mexico, killing 18 Americans. This was the only ground invasion of the continental U.S. since 1812,” according to the New Mexico State Parks Division.

There is an extensive exhibit hall and film examining this event in history. Camping cost for non-New Mexico state park permit holders is $14/day with water and electricity. Hot showers and clean restrooms.