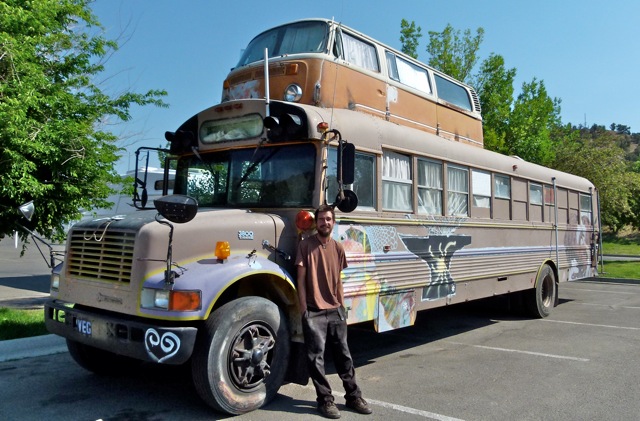 A short while back in Durango, Colo., we spotted a funky converted school bus parked on the fringe of the local Wal-Mart Supercenter. Its owner and creator, Joe Vachon, is a contemporary itinerant blacksmith.

Vachon’s work-in-progress bus doubles as his home and mobile blacksmith shop. An innovative green machine, the bus is powered by waste vegetable oil with its own on-board processing. (More about that later.) 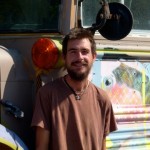 Plying his trade for seven years, this artist-smithy has been traveling from place to place for the past four years. “Migrating to warmer places in the winter and cooler spots in the summer is a way to continue my blacksmith business through the winters without having to settle for an uninspiring job so I can afford a bit of land and an enclosed shop,” said the 29 year-old former mid-westerner.

Vachon received his early training at Southern Illinois University’s L. Brent Kington Smithy. After college he began his professional blacksmith career on D Acres Permaculture Farm and Educational Homestead  in New Hampshire where he set up a teaching facility and hosted group workshops and demonstrations.

About five years ago, while living in New Hampshire, Joe bought a retired school bus and began the conversion. “I’m much better at not spending money than I am at making it, so I have built up the bus as I gradually acquired materials and funds for upgrades,” he wrote in a recent e-mail.

“To give you an idea, my initial work towards converting the bus was done entirely without electricity in the White Mountains of New Hampshire,” he continued. “Drilling holes through the bus for mounting various things was done with a hand-crank drill I had picked up at an auction. I left NH with a bed, a counter to cook on, some folding chairs, and a big pile of scrap steel and tools in the back. That was about it.” Today he has 200 watts of solar and four deep cycle batteries that supply a few power tools and lights. 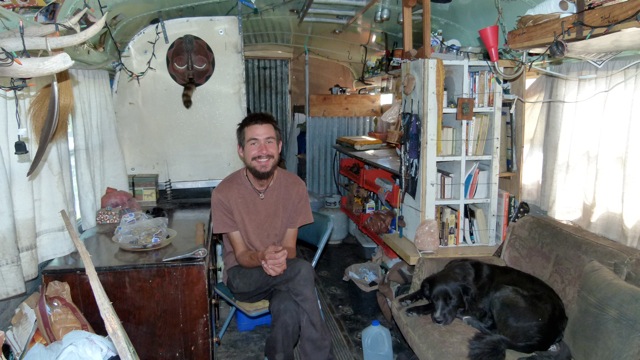 – The waste vegetable oil conversion began after “fixing a fuel delivery problem on an RV after they purchased a replacement fuel tank.” They gave him the spare fuel tank to compensate for his work. “I built a heat transfer in it supplied by the engine coolant lines and bolted it under my bus, and created a waste vegetable oil system, with a transfer tank, pump, filters, and water separator. Now my diesel engine runs on 95% waste vegetable oil from restaurants. I warm it up on diesel fuel, then switch over to the filtered vegetable oil tank once it’s heated from coolant (making it thin enough to run through the fuel system effectively), then purge the system with diesel fuel when I’m done driving for the day to allow me to start it back up when it’s cold.”

– The 1978 VW addition on top of his bus came last year after he purchased a 1971 VW bus in Oregon that needed a lot of work. He towed the ’71 bus from Oregon to a VW shop in Stockton, Calif., where he was able to live and fix it up to be his “town-runner” for when he is camped out of town, and for his “veggie oil get’r.”

“A friend of the VW shop offered me his ’78 VW bus in exchange for meticulously removing all of the useable parts from it,” he wrote. “A week and a half later, I had it severed from the chassis; a floor built in it with old bed-frame and plywood; and mounted on the big bus with six ‘L’ brackets made from leaf spring and 22, 1/2-inch bolts with backing plates securing it to my roof. We used a neighbor’s fork-lift for getting it up there. It functions as my bedroom now.”

– As for his blacksmithing wares: “Everything made in the shop is hand forged from post-consumer steel that I pick up at scrap yards and scavenge along rail-roads, road-sides, construction sites, or anywhere else steel has been discarded and left to dissolve into rust.”

One of Vachon’s signature works is a railroad spike knife with an old man’s face sculpted in handle. The “knife is forged from a single high carbon railroad spike. Heated to a yellow glow and carefully hammered repeatedly to create the blade. The handle was twisted in a vice at a glowing heat. From start to finish, it takes about four hours to create a blade that holds a proper edge from a rail-road spike,” said the blacksmith. (click on images to enlarge)

To see more of his crafted items click here.

“My life path since I’ve started living in the bus has taken a lot of work fueled by my passion for living free and true to my spirit,” said Vachon. 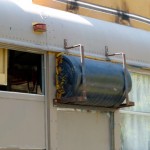 “I have had the opportunity to explore this continent more than I had ever dreamed. I’ve met wonderful people and seen a tremendous amount of beauty the land has to offer, all while implementing the craft of blacksmithing recycled steel in an age of waste and a deteriorating understanding of how to ‘do it yourself.’ I have taught 100’s of people the craft, hands-on, and have demonstrated for 1,000’s in nine different states while making home and garden wares, cutlery, bush crafts, tools, and reproduction work, in addition to doing sharpening and repair jobs of all sorts,” he said.

Living and working full-time in an aging bus has its challenges. While people will most likely find him in and around Quartzsite, AZ, between December and March, he is currently looking for a consistent summer spot to live and set up his mobile shop. 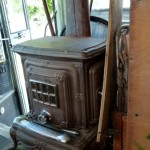 “A goal that is popping into my mind more regularly is the idea of consistently residing on some land in the summers where I can begin homesteading again and focusing more on setting roots and nurturing growth with a small community as opposed to having to expel such a large portion of my energy pushing through a world which is most-effectively resistant to what I’m trying to do,” he reflected.

“I believe there will be a day somewhere down the road when blacksmiths will once again be called to the center of towns and villages to fulfill a foundational position in society,” he said. “Whether or not I live to see this transition is irrelevant. It is my job to sustain the craft and expose it to people as a viable and ethical trade in a simpler, more ecologically conscious world.”

The following quote by Chief Joseph of the Nez Perce rests on Joe’s dashboard:

“Let me be a free man –
free to travel
free to work
free to trade where I choose
free to choose my own teachers
free to follow the religion of my fathers
free to think and talk and act for myself –
and I will obey every law
or submit to the penalty.”
— Chief Joseph

Photos by Julianne G. Crane (Top) The back corner of  Joe Vachon’s bus is where the blacksmith shop unfolds. The VW on top functions as a bedroom. (Next) Living room and kitchen assembled “entirely from scrap materials and things from second-hand stores.” Notice the ladder that folds down inside for access through a 2-foot by 2-foot hole to the bedroom/VW bus on top. Canine companion ‘Hobo’ on her couch. (Next) Chiseled face in steel handle of a knife forged from a high carbon railroad spike. (Next) Mounted in one of the windows is a 15-gallon warm water gravity-feed tank for washing dishes and such. (Last) Wood-stove for heating and cooking inside.